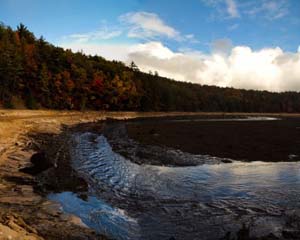 Northern Michigan News: Back in the May 2012 issue of Traverse, Northern Michigan’s Magazine, photographer Mark Lindsay shared photos and thoughts about Traverse City's Brown Bridge Pond. The pond was a dam backwater that he cherished, and it was being drained as part of an effort to remove Brown Bridge Dam.

The draining of the pond had been proceeding in stages for several months and was supposed to move into its final phase this past weekend, a process that involved lowering the pond by one foot a day for about three weeks. But something went wrong, and instead water breached the containment structures installed for the draining, and what was left of Brown Bridge Pond gushed downstream and drained in about six hours.

Mark Lindsay happened to be driving past the Boardman River as the breach was playing out, and it changed his afternoon. We asked him to share a few of the pictures he captured as the pond drained and describe what he saw.

Click here to read the blog and view photos of the Brown Bridge Pond dam breach.