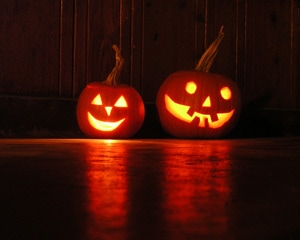 Northern Michigan Events: Halloween 2012 is on a Wednseday this year, but there are plenty of ghoulish Halloween events and festivities taking place the weekend leading up to the spookiest day of the year! Whether you're a kid or an adult, family or group of friends, we've got your Northern Michigan Halloween weekend 2012 covered from Traverse City to Petoskey and beyond.

Plus! Check out the MyNorth.com Guide to Northern Michigan Halloween Trick-or-Treating 2012.

Bring the kids for the annual parade of little ghosts and goblins as Downtown Traverse City invites costume clad children and their parents to trick-or-treat at participating stores throughout the Downtown area.

The Zombie Run has become a T.C. favorite since its creation in 2009 and is well on its way to becoming a Halloween tradition. What's not to like? Zombies and beer have always been a winning combination. Remember to stick around after the race because the beer will be flowing. Who says you can't drink before noon? Besides, you’re already dead anyway!

Petoskey's Halloween Celebration begins at 10am with a Children's Costume Parade. Children march in their Halloween costumes down Howard Street, to Pennsylvania Park. After the parade kids are invited to trick or treat Downtown. For the adults, Petoskey is offering a Soul Food and Spirits progressive dinner through downtown restaurants beginning at 6pm with stories of the ghouls and ghosties that inhabit Downtown Petoskey. $50/person includes a 5-course dinner. Call for reservations, 231.622.8501.

The Dog Party! in Traverse City

"The Dog Party" Grand Opening Celebration will be held Saturday, October 27th, 12-3pm at the dog park on Division and Bay Streets in Traverse City.  Please join us to celebrate the successful community and city project.  There will be dog related events, a Halloween dog/owner costume parade and competition, vendors–and "pawsitively" great fun for all!

Halloween Spooktacular and Parade in Pentwater

Have some spooky holiday fun at the Peter White Public Library. The Family Halloween Party is for all ages and there is no admission charge. Listen to live folk dance music by "All Strings Considered," play fun games, make and take haunting crafts, and enjoy ghoulishly delightful refreshments. Come in costume and have a monstrously good time!

Bear witness to this large-scale community outdoor performance of giant puppetry, percussion and theatrical dance! Some of the enchanted include: ravens on skates, zombie folk dancers, stilt walking spirits, a life-size dragon and a skeleton marching band. As the evening grows dark, the community is invited to join in processions throughout the Marquette converging in the Marquette Commons to witness Marquette’s first Halloween Spectacle.

The public is invited to attend a special evening of fun on Halloween.Seniors are encouraged to come in costume and join them for a mystery meal at 5pm. The special menu includes: Bucket of Bones, Green Fingers, Silence of the Yams, Spooky Eyeballs and Witches Hats. Prizes awarded for the best costume and for the person we're unable to identify. The cost for the mystery dinner is $4.75 for those under 60 and a suggested donation of $2.50 for everyone 60 and older.

Lots of fun, treats and games for kids at this free Halloween event, including a Jump House at dusk.