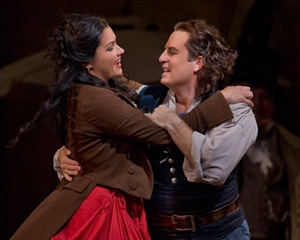 Northern Michigan Events: See an opera in Northern Michigan…and a funny one at that! Ramsdell Theatre in Manistee will be showing Bartlett Sher's new production, Donizetti's L'Eliser d'Amore, Saturday, October 13, 2012 at 12:55 p.m.

Anna Netrebko and Matthew Polenzani star in Bartlett Sher's new production of one of the greatest comic gems in opera, as the fickle Adina and her besotted Nemorino. Mariusz Kwiecien is the blustery sergeant Belcore and Ambrogio Maestri is Dulcamara, the loveable quack and dispenser of the elixir. Maurizio Benini conducts.

This performance is part of the Ramsdell Theatre Governance Authority's effort to bring the Metropolitan Opera's 2012-13 arts season to Northern Michigan. The shows, including Donizetti's L'Eliser d'Amore, will be telecast live via satellite to the Ramsdell where they will be shown with their new projector and screen telecast unit.

Click here to see the Met's line-up, being shown at Ramsdell Theature through April 27, 2013 in Northern Michigan.

Order your tickets to see a New York opera in Northern Michigan! Click the Buy Tickets Now button below!

Photo(s) by Photo courtesy of www.metoperafamily.org