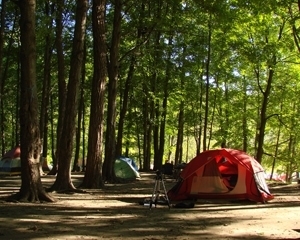 Northern Michigan Camping: A warm summer, beautiful scenery and slow economy seem to have more people camping in Michigan than ever before according to the Michigan Department of Natural Resources, who marked an attendance milestone for state parks on Friday, October 19th, by celebrating its one millionth camp night of the 2012 camping season.

The one millionth camp night reservation for Algonac State Park’s River Front Campground in St. Clair County was made by George W. and Elizabeth Angerer of Roseville, Michigan. The Angerers received a Pure Michigan prize package including a free weekend of camping, a $100 gift certificate from Gander Mountain  and Pure Michigan apparel upon arriving at their campsite. The gifts were presented by acting Bay City district supervisor George Lauringer and Algonac State Park unit supervisor Dennis Wilson.

”I’m really excited to be the millionth reservation. This is how we spend our vacations,” said George Angerer. “We’re working on visiting every state park in Michigan.”

“Having our state parks reach 1 million camp nights – a milestone we have not hit since 2005 – reflects a healthy love of the outdoors and a healthy state parks system,” said DNR Director Keith Creagh. “The milestone also reflects healthy communities, because we know the success of state parks gives a positive boost to local economies.”

Michigan state parks have reported a strong surge in campground visitors this year with a 7-percent increase in advance reservations over the 2011 season.

“The 2012 season started with a nearly sold-out Memorial Day Weekend, and attendance remained steadily high as park visitors sought relief from the summer’s exceptionally long stretches of hot, dry weather,” said DNR Parks and Recreation Division Chief Ron Olson. “The trend was an indication to us that we possibly were on track to see reservations topping 1 million camp nights.”

Harold Herta, chief of Resource Management for the Parks and Recreation Division, credited the rise in camping to both positive economic factors and the DNR’s fresh approach on outreach to state parks visitors.

“Many people looking to cut costs in their already-strained budgets have turned to the state parks as a way to stretch their vacation dollars,” Herta said. “Most people go camping because a weeklong trip can cost under $300 — compared with $3,000 and up, for example, for a week at Disney.”

Herta said camping in Michigan’s state parks has become even more cost-friendly with the introduction of the DNR’s Recreation Passport. The DNR has seen more residents looking for bargains opting to sign up for the annual $10 Passport when renewing their vehicle registration. The Passport, which in 2010 replaced the previous park stickers, was popular in 2011 and has seen 27 percent of Michigan residents checking “yes” for the Passport this year.

Herta also said the lower cost of gasoline earlier this summer prompted visitors to take their recreational vehicles on the road more often. Additionally, the DNR’s newly expanded options in alternative lodging; the increase in its award-winning Recreation 101 programs that offer expert instruction on 50 different kinds of recreational activities; group events such as outdoor movie nights; and educational programs like August’s Meteors & S’mores astronomy program have also increased the number of park visitors.

For the $10 Recreation Passport, you have access to more than 100 state parks and over 1,000 free educational and recreational programs,” said Maia Stephens, recreation programmer for Michigan state parks and harbors. “We provide the gear and expert instruction, and visitors get to learn a new activity and all about Michigan’s natural and historic environment. It’s the best deal in entertainment in the state!”

Most of Michigan’s state parks now offer camper cabins, year-round occupancy yurts, cottages and lodges through the state parks’ central reservation system. The two, new deluxe rental cabins at Holly Recreation Area that offer two bedrooms, a kitchen and living area and a bathroom have been heavily booked since they opened in June.

“When you visit Michigan’s state parks and are surrounded with our forests, rivers, lakes and streams that have been here for thousands of years, it’s hard to imagine that changes ever occur here,” Olson said. “But the goal of our park system is to continually reinvent ourselves to suit this modern generation of campers while preserving all the natural elements they come here to experience. As the world gets more hectic, we think Michigan residents will continue to turn to their state parks as resources for rest and renewal.”

Find out how to get outdoors in Northern Michigan at MyNorth.com!
X
X