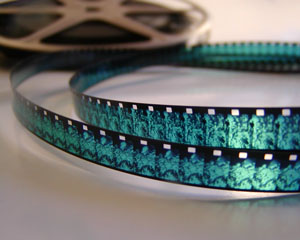 Northern Michigan Events: Head to The Garden Theatre in Frankfort this weekend for the chance to see thirteen international films and five short films by students from the Interlochen Motion Picture Arts program, as part the the 4th Annual Frankfort Film Festival, October 18-21, 2012. Check out the Frankfort Film Festival lineup below.

Set in the near future, Frank, a retired cat burglar, has two grown kids who are concerned he can no longer live alone. They are tempted to place him in a nursing home until Frank's son chooses a different option: against the old man's wishes, he buys Frank a walking, talking humanoid robot programmed to improve his physical and mental health. What follows is an often hilarious and somewhat heartbreaking story about finding friends and family in the most unexpected places.

Shun Li works in a textile factory in the outskirts of Rome in order to get her papers and enable her eight-year-old son to come to Italy. She is suddenly transferred to Chioggia, a small city-island in the Veneto lagoon, to work as a bartender in a pub. Bepi, a Slavic fisherman, nicknamed the Poet by his friends, has been a regular at that little pub for years. Their encounter is a poetic escape from solitude, a silent dialogue between cultures that are different, yet not more distant. It is an odyssey into the deep heart of a lagoon, which can be both the mother and cradle of identities, which never keep still. But the friendship between Shun Li and Bepi upsets both the Chinese and local communities, who interfere with this new voyage, which they are perhaps simply too afraid of.

When JW becomes a drug runner in order to maintain his double life, his fate becomes tied to two other men: Jorge, a fugitive on the run from both the Serbian mafia and the police, and mafia enforcer Mrado, who is on the hunt for Jorge.

From the producers of Little Miss Sunshine – When an unusual classified ad inspires three cynical Seattle magazine employees to look for the story behind it, they discover a mysterious eccentric named Kenneth, a likable but paranoid supermarket clerk, who believes he's solved the riddle of time travel and intends to depart again soon. Together, they embark on a hilarious, smart, and unexpectedly heartfelt journey that reveals how far believing can take you.

In the tiny, rural town of Texas, assistant funeral director Bernie Tiede was one of the town's most beloved residents. He taught Sunday school, sang in the church choir and was always willing to lend a helping hand. Everyone loved and appreciated Bernie, so it came as no surprise when he befriended Marjorie Nugent, an affluent widow who was as well known for her sour attitude as her fortune. Bernie frequently traveled with Marjorie and even managed her banking affairs. Marjorie quickly became fully dependent on Bernie and his generosity and Bernie struggled to meet her increasing demands. Bernie continued to handle her affairs, and the townspeople went months without seeing Marjorie. The people of Carthage were shocked when it was reported that Marjorie had been dead for some time, and Bernie was being charged with the murder.

Elena is a gripping, modern twist on the classic noir thriller. Sixty-ish spouses Vladimir and Elena uneasily share his palatial Moscow apartment—he’s a still-virile, wealthy businessman; she’s his dowdy former nurse who has clearly “married up.” Estranged from his own wild-child daughter, Vladimir openly despises his wife’s freeloading son and family. But when a sudden illness and an unexpected reunion threaten the dutiful housewife’s potential inheritance, she must hatch a desperate plan….

The Queen of Versailles

The Queen of Versailles is a character-driven documentary about a billionaire family and their financial challenges in the wake of the economic crisis. With epic proportions of Shakespearean tragedy, the film follows two unique characters, whose rags-to-riches success stories reveal the innate virtues and flaws of the American Dream. The film begins with the family triumphantly constructing the biggest house in America, a 90,000 sq. ft. palace. Over the next two years, their sprawling empire, fueled by the real estate bubble and cheap money, falters due to the economic crisis. Major changes in lifestyle and character ensue within the cross-cultural household of family members and domestic staff.

… deftly melds narrative and documentary in a transcendently powerful drama-within-a-drama. The film was made in Rome's Rebibbia Prison, where the inmates are preparing to stage Shakespeare's Julius Caesar. After a competitive casting process, the roles are eventually allocated, and the prisoners begin exploring the text, finding in its tale of fraternity, power and betrayal parallels to their own lives and stories. Hardened criminals, many with links to organized crime, these actors find great motivation in performing the play. As we witness the rehearsals, beautifully photographed in various nooks and crannies within the prison, we see the inmates also work through their own conflicts, both internal and between each other.

On a dark Devil's Night in Detroit a young man learns what it really means to face the consequences of his actions. Michigan Film Maker Jasmine Rivera On Site.

Beasts of the Southern Wild

In a forgotten but defiant bayou community cut off from the rest of the world by a sprawling levee, a six-year-old girl exists on the brink of orphanhood. Buoyed by her childish optimism and extraordinary imagination, she believes that the natural world is in balance with the universe until a fierce storm changes her reality. Desperate to repair the structure of her world in order to save her ailing father and sinking home, this tiny hero must learn to survive unstoppable catastrophes of epic proportions.

Jiro Dreams of Sushi is the story of 85 year-old Jiro Ono, considered by many to be the world's greatest sushi chef. He is the proprietor of Sukiyabashi Jiro, a 10-seat, sushi-only restaurant inauspiciously located in a Tokyo subway station. Despite its humble appearances, it is the first restaurant of its kind to be awarded a prestigious 3 star Michelin review, and sushi lovers from around the globe make repeated pilgrimage, calling months in advance and shelling out top dollar for a coveted seat at Jiro's sushi bar. At the heart of this story is Jiro's relationship with his eldest son Yoshikazu, the worthy heir to Jiro's legacy, who is unable to live up to his full potential in his father's shadow.

Like every morning, Madalena makes bread for Antonio's old coffee shop. Like every day, she crosses the railways where no trains have passed for years; she cleans up the gate of the locked cemetery, and listens to the priest's sermon before sharing lunch with the other old villagers. Clinging to the image of her dead husband and living in her memories, Madalena is awakened by the arrival of Rita, a young photographer who is arriving in the ghost village of Jotuomba, where time seems to have stopped. A deep relationship is forged between the two women, which gradually builds to have a profound effect on both of their lives, as well as the rest of the villagers.

Post World War II, Berlin. A young German woman prepares to leave the war-ravaged city to begin a new life in America with her G.I. fiancé. But standing between her and a hopeful future is a relentless police inspector, determined to prevent her from escaping her past. Local producers James Carpenter and Rebecca Reynolds, plus New York-based writer/director Larry Brand on site.

In Montreal, an elementary school teacher dies abruptly. Having learned of the incident in the newspaper, Bachir Lazhar (Mohamed Fellag), a 55-year-old Algerian immigrant, goes to the school to offer his services as a substitute teacher. Quickly hired to replace the deceased, he finds himself in an establishment in crisis, while going through his own personal tragedy. The cultural gap between Bachir and his class is made immediately apparent when he gives them a dictation exercise that is beyond their reach. Little by little, Bachir learns to better know this group of shaken but endearing kids, among whom are Alice and Simon, two charismatic pupils particularly affected by their teacher's death. While the class goes through the healing process, nobody in the school is aware of Bachir's painful past; nor do they suspect that he is at risk of being deported at any moment. French with English Subtitles –