In Memory of Jeremy Jelinek 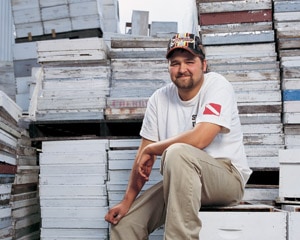 Jeremy Jelinek, who died in a tragic accident Monday, October 15, was a loving husband, father and a skilled and dedicated beekeeper. In June of 2006, just as he was launching his career, Jeremy discussed his chosen livelihood with Traverse Magazine. We are posting that interview as a tribute to Jeremy and his family.

Jeremy Jelinek, 20, grew up in Suttons Bay farm country learning the trade of his beekeeper grandfather Jim Jelinek, who once kept the second-largest apiary in Michigan. Jeremy owns 150 of his own hives under the family name Jelinek Apiaries and also currently works for a national company pollinating fruit in bloom all over the country. He hopes to one day have 1,000 hives and be the biggest beekeeper in Michigan.

You never met your beekeeper grandfather:

Grandpa died the year I was born. He raised five kids just off raising honey. I started at age 4 learning from Dad and our neighbors. They didn’t make a suit small enough so I wore a snowmobile suit. My grandmother eventually made me one.

You work as a migratory beekeeper- does that mean you’ve seen a lot of America in bloom?

Orange groves in Florida, almond trees in California, cranberries in Wisconsin. They’re all real pretty, but I still think it’s prettier here. My goal is not to be a migratory beekeeper, to work just here in MIchigan.

Do you produce a lot of honey?

The price of honey is so low, so pollination is the big thing. My goal is making bees instead of making honey.

Bees die from the heat faster than they will from the cold. If it’s cold and you’re working, take the cover off the hive and the heat coming off the bees will warm you right up.

Do bees ever get tired of being busy?

If it’s warm out and there’s flowers, they’ll work.

What kind of bees do you raise?

Minnesota Hygienics. I like them because they’re great population builders. Buckfast bees are great honey producers.

Does every farmer in the North hire his own hives to pollinate his own orchard?

No, in fact a lot of them depend on the other farmer nearby to get the bees. Bees will cross over into another orchard. But the bees know what hive to come back to.

I made 12 barrels of honey – that’s 660 pounds of honey- once in a 10-by-12 foot barn. I spun it by hand. And had to do it all at night. Because once it dries out and there are no flowers, bees will rob the honey supers [the part of the beehive used to collect honey]. They’ll steal that honey right back!

There’s not a day in the bee yard when I don’t.