Traverse City Made in Michigan October Festival at the Commons 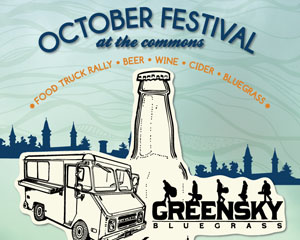 Traverse City Events: Porterhouse Productions is at it again, bringing another awesome festival to Traverse City! This summer we soaked up the sun at the Great Wakes Festival, dined and danced at Paella in the Park, and rocked it out at the Traverse City Summer Microbrew and Music Festival. Now that fall is here it's time to live it up at the "Made in Michigan" October Festival!

Get your tickets and spend October 12, 2012 from 5:00-10:00 p.m. at the Grand Traverse Commons in Traverse City sipping local wine and craft beer, noshing on local restaurant's festival grub, and dancing the night away to live music and entertainment.

The "Made in Michigan" October Festival will feature a Food Truck Rally,  beer, wine, cider and Greensky Bluegrass with very special guests Joshua Davis and Lindsay Lou & The Flatbellys. Also not to be missed–Roaming Harvest, Curbie, Totally Baked Wood Fired Pizza, Silver Spork (and more to be announced) will be serving up delicious fare.

From the Michigan entertainment to the Northern Michigan beer and wine, the October Festival is truly a "Made in Michigan" event!  The evening will also include a Silent Disco with DJ Dominate, Glow In The Dark LED Disc Golf, bonfires, heated tents, and free shuttle rides to/from Old Town Parking Deck.

Proceeds and 100% of alcohol sales benefit Bay Area Recycling for Charities.  BARC focuses its efforts on converting recyclables into revenues, not only to support itself and fund its expansion, but to give maximum donations to local charities.

Don't miss this chance to support Northern Michigan and have fun in Traverse City! Tickets are $20 preorder, and $25 at-the-door, 21+ only. Hurry up and get your tickets to the "Made in Michigan" October Festival!

Photo(s) by Images from www.porterhouseproductions.com