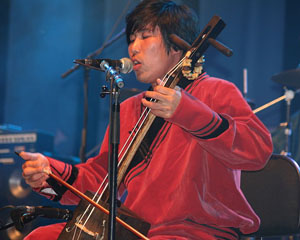 Traverse City Events: Since first appearing in Traverse City in 2009, Hanggai has emerged on the international stage as one of China's outstanding touring bands. On September 29, 2012, they'll come to the Milliken Auditorium at Dennos Museum Center in Traverse City for an 8:00 p.m. show on their tour of the United States, which includes a performance at The Kennedy Center in Washington DC among other prestigious venues.

Hanggai is a Beijing-based group of musicians who left the punk rock clubs of Beijing to re-discover their roots in Inner Mongolia. They now perform Mongolian folk music with traditional and western instruments combined with raspy deep throat singing and a loosely rock-based structure, creating music that will make you “homesick for a place you've never been" (Rhapsody).

Tickets are $25 in advance, and $22 for Dennos members. Click the Buy Tickets button below to order yours!