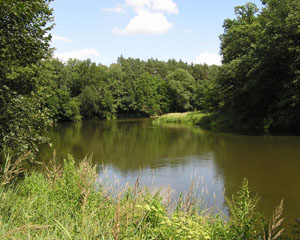 Northern Michigan: The environmental groups the Sierra Club and Anglers of Au Sable are rejoicing that for the first time in nearly a decade, a rare, truly wild stretch of the Au Sable River in Northern Michigan is free from the threat of a proposed oil and gas drilling project. The groups assert that the project would have endangered the state’s premier trout stream and one of its most spectacular old growth forests. According to the Sierra Club:

In 2003, a Traverse City oil and gas exploration company sought a permit to place a drilling pad in an old growth area of Huron-Manistee National Forest next to the Mason Tract, a wild piece of land hugging the Au Sable River. This week that company, Savoy Energy, told the US Forest Service (USFS) that it is abandoning its nine-year effort to drill in the so-called South Branch area.

“This is a victory for everyone— the environment, Michigan and the people who enjoy and appreciate the beauty of the Au Sable River,” said Anne Woiwode, Michigan Chapter director.  “It’s also a victory for the Sierra Club and Anglers of the Au Sable which remained vigilant about this ill-advised proposal and the federal approval process all these years.”

The Mason Tract was designated “Forever Wild” by the Michigan Department of Natural Resources 50 years ago and boasts spectacular fishing, hunting, canoeing, cross-country skiing and hiking.  The drilling pad would have been located near the Mason Chapel, an open-air, nondenominational space beloved by fisherman and other river users.

The reason for Savoy Energy’s application withdrawal isn’t clear, but the involvement of the Sierra Club and the Anglers of the Au Sable in opposing the proposal no doubt played a significant role, said Woiwode.

Nine years ago, Nancy Shiffler, a long-time Sierra Club member and volunteer, first noticed that the proposed well was on national forest land designated as old growth in 1986, and adjacent to the Mason Tract.  She alerted the Michigan Chapter’s forest policy specialist, Marvin Roberson, who tracked the project to determine if correct procedures for approval of an application to the USFS were followed.

They weren’t, and the Sierra Club with the Anglers of the Au Sable actively fought the proposal, using tactics that included a successful lawsuit against the Huron-Manistee National Forest after the USFS failed to adequately assess all viable alternatives to the proposed siting of the well pad.  The Sierra Club had submitted a suggestion for another location to the USFS that would have kept the Mason Tract safe from the impacts of drilling, according to Roberson, but that alternative was rejected.

Ultimately, a federal judge agreed with the conservation groups and remanded the case to the USFS, requiring a full Environmental Impact Statement be conducted, a year-long process the agency was finishing up when it received the withdrawal letter from Savoy earlier this week.

“This is a perfect example of why the Sierra Club has been around for 45 years in Michigan and 120 years in the nation,” said Roberson.  “We have a vast network of dedicated, vigilant volunteers and knowledgeable staff who know what to do and have the willingness to stay in the fight until it’s won.”

Woiwode agrees. “The Sierra Club is the only organization in Michigan with the policy expertise in matters like this to have made this happen. Marvin is among the very few people who understands how the sometimes complicated federal and state approval process works,” she said.

Parts of the Mason Tract were originally owned by Bill Durant, the founder of General Motors, who built a grand home dubbed Durant’s Castle in the 1930s that burned down before he could live in it. Soon after, George Mason, the president of American Motors, purchased the rest of the properties on either side of the south section of the Au Sable River.  He willed the piece to the state when he died, and it became the largest wild stretch of river in Michigan’s lower peninsula.

“The combination of Sierra Club’s policy expertise coupled with the extensive on-the-ground knowledge of Anglers of the Au Sable made for a terrific partnership,” Roberson said. “The Mason Tract is safe for now but we have to stay vigilant and hope that this sets a precedent so other companies won’t try to drill foolishly near our few remaining precious pieces of wilderness.”

Find out what's going on in Northern Michigan at MyNorth.com!
X
X