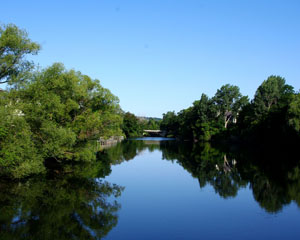 Northern Michigan: The Boardman River has seen its share of the effects of greed and domination over the decades. It is after all, defenseless, unless you consider groups and individuals who rise to its support on occasion, but it cannot speak for itself. As a watershed, it has fallen into improper use many times, and most of those times it has been viewed and exploited as an economic resource. For too many it is literally a water-fueled engine that has the capability of generating mountains of cash for those who most likely see it as a river filled with money rather than water.

The river comes down from swamps, hummocks, cold-water seepages, and deep, hidden springs. Some of it comes literally from the sky. It is fished, kayaked, tubed, canoed, and stared at for miles, and some of that use is detrimental. It does have a carrying capacity of human traffic, which has yet to be determined, so apparently it is up for grabs. Who wants it? Everyone wants it.

To me, there are serious interlopers on its banks who have been formulating plans for years. The most sinister plan for the river is one I take personally. There are those in the Department of Natural Resources Fisheries Division who long to see the entire river as a steelhead stream, and there is a large cadre, I suppose, who would also like to see salmon in the river upstream all the way to Kalkaska.

These plans have most likely been in place for years, and now, with advocates in positions of decision-making in the DNR, they are almost sure to become a reality. But with salmon and steelhead comes more human traffic, and with that, more trash, more bank degradation. Allowing so many giant fish into the relatively small Boardman River would also be a direct threat to the headwaters where brook trout come to life. Recently I have also been privy to information about the possible use of federal money to facilitate the movement of sturgeon upstream. This idea, replete with the necessary trucks to move such large fish, has all the markings of a backdoor entry for easily moving steelhead into the river … you borrow the trucks and the crew for a few forays carrying steelhead to the promised land.

In the face of these threats, if I had my druthers, I would like to see the Boardman become a closed river … an odd notion, I concede. Close the whole thing and let it be. Let people just come to look at the river for a decade or so, so they might come to appreciate what it truly is. The state calls the Boardman River a Blue Ribbon trout stream, but it's hardly that if you consider the total lack of fishing regulations reserved for some of Michigan's finer waters. Unlike the Manistee River or the Au Sable River, the Boardman has no catch-and-release-water and no flies-only water either. Remove Brown Bridge Dam and let's keep it at that, unless there is a move to keep anadromous fish where they currently must stop now.

I think of the Boardman River and all rivers as living entities, in and of themselves. They exist, to crib from John Muir speaking of the grizzly, ‘for their own magnificent selfness'. Much as I love to be on the river, to fish and wade and to float, I know it does not merely exist for me to do that, but I also know that there are those who would call me a snob, that I want it all to myself, which, of course is true, but only in dreams.

I also believe the Boardman does not exist as a resource to exploit; that it does not exist to be loaded with drunken floating traffic on a lovely weekend in June; that it does not exist to be abused again the way it was throttled during the lumbering days, when money was literally made of trees gouging their way down the Boardman. No, this is a lovely river, plain and simple. It is a combination of melt, rain, aquifers, water, swamps, seeps, and tiny creeks with no names, and being moving, living water, it is far more valuable than any money I can count.