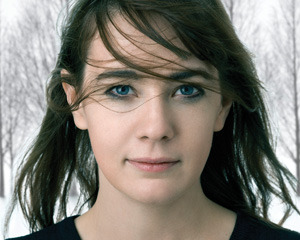 Traverse City National Writers Series: Coming hot on the heels of major Young Adult (YA) hits like Harry Potter, The Hunger Games and Twilight, critically acclaimed author Maggie Stiefvater is poised to become YA's Next Big Thing. The New York Times best-selling author, who first became a literary star when her Wolves of Mercy Falls trilogy (consisting of Shiver, Linger and Forever) gained a rabid national following, had another recent major hit with her supernatural thriller The Scorpio Races. With film adaptions of both projects currently in the works at Warner Brothers, the 30-year-old author is now focusing on the next step in her path to YA domination: The launch of an exciting new series called The Raven Boys, a supernatural romance about a boy on the hunt for a vanished Welsh king.

On Thursday, September 27, Stiefvater will visit the National Writers Series at the City Opera House in Traverse City for an exclusive discussion about her life and best-selling works. The event is one of only two stops in the author's national tour in which she will also give away a guitar, affectionately called the "Sharpie Guitar" because of its detailed marker drawings personally inscribed by the author, to a lucky audience member. In advance of her visit, MyNorth spoke with the warm, feisty author about the inspiration behind her new series, the upcoming film adaptations of her novels and why 40-year-old women in Czechoslovakia are going as crazy for her books as teenagers in the Midwest.

MyNorth: Your new novel The Raven Boys is the first in a four-part supernatural romance series rooted in Welsh mythology. What was the inspiration behind the series?

Maggie Stiefvater: The inspiration began a long time ago— and I mean a long time ago, when I was a little girl. I was reading the middle-grade fantasy books then, and I was particularly obsessed with Susan Cooper's The Dark is Rising series and Lloyd Alexander's The Black Cauldron. Both of those stories were retellings of Welsh mythology, and it made Wales seem like this magical place to me. I not only dreamed as a young writer of writing a story involving Welsh mythology, but of writing a longer series like those books, where you got to spend time with the characters and really get to know them. I started a draft of this book when I was 19 and in college, but I just wasn't a good enough writer then to handle the characterizations and root the mythology in the real world.

MyNorth: What made you put the draft away at that time?

Maggie Stiefvater: I got stuck. I used to get stuck a lot back then. Before I got out of college, I actually had 30 unfinished novels, because I couldn't come up with the end of a series and so I'd write myself into a corner. Sometimes I would write that aliens came down and killed everyone, just because I needed an ending. (laughs) But with this book, I stuck the draft in a drawer and decided to come back to it. I realized later while writing history papers in college that if you had the ending first, the thesis so to speak, the rest of the writing came much more easily. That ended up working well for my novels, and for this series – having an ending in mind and writing to it.

MyNorth: Many of your novels, including the Wolves of Mercy Falls trilogy and The Scorpio Races, contain supernatural elements. What about the supernatural appeals to you as an author, particularly when it comes to writing YA fiction?

Maggie Stiefvater: I love how the paranormal and mythology make all problems and issues seem universal. One of the things that fascinated me about the Wolves of Mercy Falls trilogy was that it sold in 38 countries, which seemed crazy because I could see where a teen or twenty-something in the U.S. would like the story but I hadn't counted on, say, a 40-year-old woman in Czechoslovakia picking it up. But in reading letters from readers and reviews from around the world, it became clear that the story resonated because the idea of losing your identity (in this case, becoming a werewolf) was something everyone could relate to, rather than being a particularly American issue. So there's a universality to the supernatural.

MyNorth: New Line Cinema has recently acquired the film rights to The Raven Boys, and Warner Brothers is currently involved in producing film adaptions of both Shiver and The Scorpio Races. What stage are those film projects in right now?

Maggie Stiefvater: The Scorpio Races now has a screenwriter, which is exciting, and I really like the producers and the vision they have for that project. The Raven Boys deal is very young, but I have to say I'm hugely excited about Akiva Goldman (Oscar-winning screenwriter, A Beautiful Mind) being involved, because I love his writing and I think he's a great match for it.

MyNorth: Do you have any fears or reservations about turning your work over to someone else to adapt? Or are you mostly excited to see what makes it to the screen?

Maggie Stiefvater: I'm one of those rare authors who loves movie adaptations as much as I love the books. I have no problem seeing them as separate entities. My main concern is I really want the films to preserve the mood of the books, which is what all successful adaptations do. The Hunger Games, for example, really preserves the mood of that book. I feel like the producers attached to my books understand the mood, and I got to help choose those people, so they have a vision for it that closely resembles mine.

MyNorth: You gave a TED talk recently entitled How Bad Teens Become Famous People in which you warned about the dangers of labeling teens as "bad" or "problem" kids, and shared how creative outlets can help them break free of those labels. Was that true of your own experience as a teen?

Maggie Stiefvater: I was a small and black-hearted child who got into trouble for punching my classmates, standing on tables, refusing to take naps and generally refusing to conform. My parents many times threw their hands up and decided I was lost and that I was going to be the least successful of all my siblings. But it was really about me just trying to find my place. Thankfully, when I was homeschooled I was able to grow up without having to deal with those labels, outside of my parents. If I had gone to a traditional school, it could have been a very different story. That's really an area where I think adults need to be very sensitive with teens.

MyNorth: One thing you've become known for is the variety of creative mediums in which you work: You compose music to go with your books, you create these unique book trailers to go online, you illustrate and paint and make art, and of course you write the books themselves. How do those different outlets intersect and influence each other when it comes to expressing an idea?

Maggie Stiefvater: There's this poem called "The Blind Men and the Elephant" about these five blind men who are each touching a different part of an elephant and guessing what it is. One has a tail, and so he thinks the elephant is a rope. Another one is touching a leg, and so he think it's a tree trunk. But really they're all touching the same animal. I feel like when I do my art, and I write, and I paint, it's the same thing—I'm describing the same animal, just from different sides. Almost all of my ideas get treatment from all of the different medias I have available at my disposal. The work is never boring! I enjoy that creative process—it makes things a lot of fun.

An Evening with Maggie Stiefvater, which will be moderated by Bookends YA book reviewer Lynn Rutan, will take place on Thursday, September 27 at the City Opera House in Traverse City. Doors open at 6 p.m.; the event begins at 7 p.m. Tickets are $15 in advance or $20 at the door, $5 for students and $10 for educators. A special Whatta Book Deal! package including premium event seating and a signed hardcover copy of The Raven Boys is available for $28. Tickets are available at the City Opera House box office or online at cityoperahouse.org. The evening will include pre-event live music by The Accidentals, dessert courtesy of Morsels, a cash bar, an audience Q&A and a book signing with the author.

For more information on this and other upcoming NWS events, visit nationalwritersseries.org.