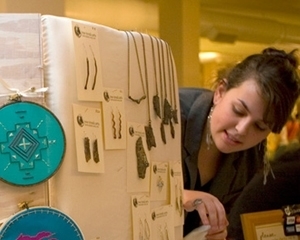 Traverse City Events: Do you care about indie craft? So does the Traverse City Makers Mart! This juried art market will feature independent artists and their handmade goods on September 22, 2012 from 10:00 a.m. to 4:00 p.m. at the piazza at the Village at Grand Traverse Commons in Traverse City.

The independent craft movement in the United States is growing larger every year. As a response to our nation’s increasingly mass-produced culture, more and more individuals have been getting in touch with their creative nature—picking up their brushes and scissors and needles and thread—to participate in one of the most fundamental and essentially human activities: creating.

While some have found a love for making beautiful things, others have rediscovered the joy and satisfaction that comes with owning beautiful things made by human hands, and people more than ever want to connect directly to the artists whose work they love.

The Traverse City Makers Market, is a one-day, juried art market, bringing together the region’s best independent crafters and artisans, musicians and performers for one day of all-out fun and shopping.

Started by Kelly Nogoski in 2010, the Traverse City Makers Market has hosted a handful of events (fall markets and Holiday Bazaars), to lots of positive feedback and great turnouts.

That said, in 2012, the Traverse City Makers Market is stepping it up a notch. They’ve garnered themselves a new outdoor location on the Piazza at the Village of Grand Traverse Commons, which will allow them to include over 40 vendors … more than ever before!

Photo(s) by Photo courtesy of www.tcmakersmarket.com