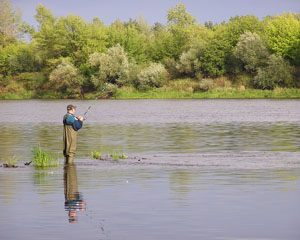 Northern Michigan Fishing: Smallmouths and whitefish and salmon…oh my! Check out this Northern Michigan fishing guide to plan out your next fishing venture. We show you what the fishing is like in Northern Michigan rivers, inland lakes and Lake Michigan. What to look forward to: see where the salmon are starting to run!

Harbor Springs: Was slow with only smallmouth bass caught near Harbor Point.

Petoskey: Salmon were caught straight out from the launch and in Bay Harbor 65 to 85 feet down in 100 to 165 feet of water. Pier anglers caught sub-legal smallmouth bass along with some nice rock bass.

Bear River: More anglers are waiting to catch that first salmon. Most are using flies or spawn. A steelhead was caught at the mouth near the "Bobber Hole."

Charlevoix: Catch rates for salmon were hit-or-miss. Anglers are fishing 45 to 120 feet down in waters 100 to over 300 feet deep off North Point and "The Can." Lake trout were caught 100 feet down. Pier anglers caught some nice smallmouth bass when using leeches. Walleye were hitting on crawlers in the early evening.

Lake Charlevoix: Had reports of walleye and some nice smallmouth bass being caught in Oyster Bay. Crawlers worked best.

Traverse City: Boats caught chinook and lake trout. Most of the salmon anglers were running 40 to 90 feet down although depths up to 160 feet were reported. Spoons and flies work best. Smallmouth bass were caught in 15 to 45 feet of water.

Elk River: Those using live bait are catching smallmouth bass and rock bass. Most of the smallmouth were running small.

Boardman River: Catch rates are slow and the fish are running small.

Frankfort: Is producing good numbers of fish 90 to 150 feet down in 150 to 220 feet of water. Meat rigs on dipsey's or downriggers are getting the most hits. Blue was the hot color and ladder backs were the most popular. Some of the chinook are showing signs that the run is getting close like a hooked jaw and the skin is starting to turn dark but the meat is still pink. Fish are being caught in the harbor, Betsie Bay and off the Elberta wall.

Onekama: Fish have been caught by those heading straight out to 125 feet and working in a north, northwest direction while moving out to 225 feet and fishing 90 to 125 down. Meat rigs caught some nice fish in the 15 to 18 pound range.

Portage Lake: Surface temperature was in the high 70's so the bluegills and bass were laying low in water 19 to 23 feet deep. Wigglers and leaches are working well for panfish but the bigger ones are being more selective.

Lake Cadillac: Is producing largemouth bass. Pike fishing was fair to good however most of the fish caught were sub-legal. Those fishing in waters 10 to 15 feet deep caught crappie, rock bass, bluegill and a few perch.

Lake Mitchell: Has good bass fishing in the coves. Anglers are using spinner, surface baits or crawlers. Pike and panfish have also been caught.

Manistee: Had good salmon fishing 50 to 100 feet down in 80 to 250 feet of water. Use glow spoons or plugs in the early morning then switch to meat rigs and green flies later. Pier fishing was slow.

Manistee River: Recent rain did push a couple salmon up into the river.

Ludington: Surface water temperatures were still in the low 70's for the most part. Catch rates are good for salmon and steelhead and consistent for lake trout and brown trout. Try 60 to 120 feet down in 80 to 200 feet of water with green and blue meat rigs or flies. Glow plugs or spoons were best in the early morning.

Pere Marquette River: Also had some chinook salmon moving up into the river. No big numbers yet but the rain and cooler temperatures have a few fish on the move.

Pentwater: Fishing slowed but those heading south and fishing off the dunes caught salmon in 150 feet of water. Fewer steelhead are coming in now. Good colors were green, orange and blue. Pier anglers caught bass and a few perch.