Traverse City Restaurant: A Chat with the Owner of TC's New Om Cafe 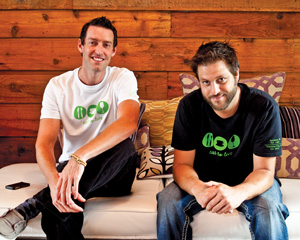 Traverse City Restaurants: Raised in the original Om Café run by his mother, Jason Thibodeau began building his culinary cred bussing tables, washing dishes and cooking—starting at age 12. A finance career took him out of Michigan for 20-plus years, but he recently returned home to expand his family’s restaurant concept to Traverse City and start a vegetarian and vegan eatery. We stop by Om to talk vegetable proteins, macrobiotics and organic cocktails.

Apart from the staples of tofu and tempeh, how does Om Café pack in the proteins?

We have seitan, which is actually a protein from wheat and made in-house at Om. In addition to many vegetable proteins, we also have protein-packed ingredients such as quinoa, adzuki beans, pintos, cashews, cheese and fish.

What are macrobiotics and how do they fit the mission?

A macrobiotic diet has an emphasis on grains and seasonal local vegetables that are simply prepared to keep their natural nutrition intact. Our dishes have no processed, refined, or sodium-laden ingredients.

What are some of Om’s featured organic cocktails?