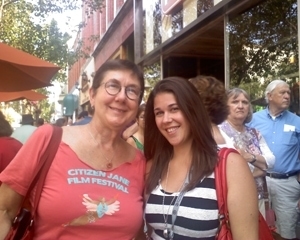 When given the opportunity to attend a few of the Traverse City Film Festival shows, I was almost overwhelmed by the variety of choices. Flipping through the pages and pages of movies in Filmgoer, my eyes lingered over the documentary, Growing Up Female. As an English major in college, I chose a class schedule that favored women's lit and feminist lit courses, but since graduating–leaving rigorous course study behind–I must admit I have fallen off the critical theory train.

Realizing my opportunity to reengage in a subject I found so personally meaningful, I got my ticket to "Growing Up Female." (Movie ticket, not train ticket. Forgive the play.)

It was my first Traverse City Film Festival experience. Arriving at City Opera House on Front Street in Traverse City, I was surprised to see a line wrapping around the block, abuzz with anticipation for Growing Up Female. So many people! For a film from the 1970's women's liberation movement? Mostly women, but a generous handful of men, too. Amazing.

The showing was MC'd by Julia Reichert herself–three-time Academy Award nominee, Emmy-award winner, film professor and director of Growing Up Female. Before her film, Reichert introduced three short films from the era and set a historical backdrop for the films, reading from "The Declaration of Sentiments," quoting Sojourner Truth, and speaking on the first women's movement for suffrage. An engaging orator, I was transported back to my women's lit classes in college. Once the films started however, I instantly realized the difference of seeing these movements in film, versus just reading about them in books and essays.

The first, Up Against the Walls Miss America, was filmed in 1968 by a small group of women that segmented themselves from the already left-winged activists of filmmaking, the News Reel Group. With choppy filming and voiceover, it was one of the first films shot by women (Reichert said to even get hold of the cameras they literally had to tear them out of male filmmakers hands). Clips of the 1968 Miss America pageant, sheep wearing sashes, and women picketing for women's liberation illuminate the beginnings of the second wave women's movement, and the need to break free of stereotyped molds that limit women to submissions of role-playing in order to fit society's imaging of women. With booing from young men in the Miss America crowds and threats of violence to the female filmmakers, it's clear what a struggle this liberation truly faced.

The second, Make Out, was also by women from News Reel Group. Filmed in 1970, Make Out was born from the discovery in newly emerging women's discussion groups that what women had for decades perceived as taboo and unspeakable, personal problems, were in fact the realities of most women. A satirical and comedic portrayal of a high school girl's make out session while on a date, the film is voiced over with actual quotes divulged in these discussion groups–for the first time giving voice to the fleeting, honest and funny thoughts that actually pass through girls' heads as adolescent boys maul, uh, make out, with them. Revolutionary for its time and still applicable and humorous today, it's a short 5 minute film all teenage girls should see.

Anything You Want to Be, filmed in 1970 by Liane Brandon, is another satirical short, documenting the growth of a young girl from childhood to young womanhood. The mantra "my parents told my I can be anything I want to be" repeats throughout the film, as shots of the young girl having to be class secretary instead of president, nurse instead of doctor and mother-mixing-formula instead of chemist, depict the institutional forces restricting a young girl from actually becoming anything she wants to be in 1970.

Widely recognized as the first feature film to come out of the modern women’s movement, Julia Reichert’s landmark documentary Growing Up Female follows six girls and women living in a small Ohio town in 1971, an anywhere USA town, if you will. Reichert's college senior project, the film was recently inducted into the National Film Registry, a feat achieved by only 25 films each year. Although it was filmed almost four decades ago, this honest and daring film remains a powerful example of what women can accomplish when they pick up the camera, giving voice to the early 1970's woman. Inspiring and thought-provoking, it truly is a film all young girls should see in order to understand how far women have come through self-actions, and the challenges that remain for the modern woman to fight today, forty years later.

I was briefly able to meet Julia Reichert after the show, and left the City Opera House feeling uplifted by what women like Reichert and these other filmmakers have achieved, and inspired to continue my personal education. It took this showing at the Traverse City Film Festival to reengage me, and that's a pretty cool thing–what something like a film festival, in Traverse City, in Northern Michigan, can inspire and achieve. I can only imagine the other experiences happening all over Traverse City this Film Festival week…