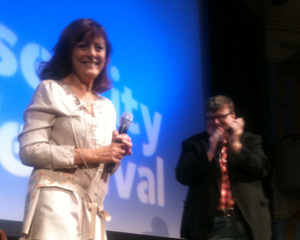 Each year I try to squeeze in as many Traverse City Film Festival movies as my work and family schedules allow. This year I got a lucky break. My daughter is away at music camp during the festival, so I’ve taken full advantage and plan to see 12 movies this week. My colleagues asked me to name five movies that I think will be especially worthwhile. Here are five that intrigue me:

The Flat delves into a family that immigrated from Nazi Germany in the 1930s to Tel Aviv. It sounds like a fascinating story, and the director will be present for a Q&A afterward. That always makes the movie much more meaningful for me.

Tickets are available in the stand-by line only, but don’t be put off by this. The Festival makes every attempt to find seats for every last person in stand-by lines. It’s rare that anyone is turned away.

Yet another documentary. This one is a portrait of Chinese artist and political activist Ai Weiwei.

I can’t wait to meet this man who’s been censored, beaten and jailed by the oppressive Chinese government. Bonus: the director will be present, and tickets are still available.

This will be my last movie of the festival, and it sounds like I’ll be ending on a high note. It’s the story of a master sushi chef whose devotees spend upwards of $350 a meal. The photography is supposed to be superb, so this is definitely one for the big screen. And tickets are still available.

I wish I could see this one. I’ve heard it’s hilarious and not many of my movie picks this year match that description. It’s another documentary profiling two real-life geologists whose hobby is making highly creative, low-budget sci fi movies. Journey to the Planet X is their latest and most complicated project. Big bonus: not only will the directors be on hand but the two subjects of the film will be there, too. And tickets are still available!

Here’s another one I hate to miss. It falls into the must-see-on –the-big-screen category. It’s a day in the life story of a young man on leave from rehab. Emotionally poignant, this visually beautiful movie is part tribute to the city of Oslo. Tickets are still available.

Grabbing a bite to eat between movies sometimes can be daunting. My sister and I just had a fantastic lunch at 7 Monks Taproom on S Union St, mere steps from the City Opera House. We shared the Abbey Burger and a House Salad. They were fabulous, and the sweet potato fries were by far the best I’ve ever had. We walked in at the height of the lunch hour and were delighted to find plenty of open tables. Meanwhile most restaurants on Front Street had waiting lines. Check it out, especially if you like beer—46 brews on tap.

See you at the movies!

Yesterday I listed five of my “don’t miss” movies at the 2012 Traverse City Film Festival.  I admitted that much to my chagrin I wouldn’t be seeing two of my choices. By late afternoon I had caved and bought yet another movie ticket. The thought of missing “Journey to Planet X” was killing me.  So I rejiggered my movie and volunteer schedules and crowbarred a fourth film into Friday. I’m sure I won’t be disappointed. Exhausted, maybe. Disappointed, highly unlikely.

Sure, I could always try to see “Planet X” on video, I reasoned, but I’d never again have the chance to meet the two filmmakers and the two subjects of the movie in the flesh right here in Traverse City. Plus, I’ve heard Michael Moore gush over this film several times this week. My movie roster is weighted toward heavy documentaries. This one, Moore assures us, is hilarious. I figure I could benefit from a little hilarity among my otherwise serious movie line-up.

And, yes, there are still tickets available to both screenings of "Journey to Planet X" . Hope to see you there!