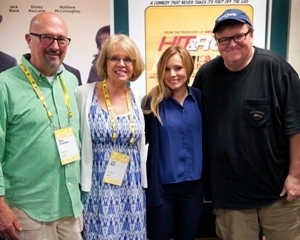 Traverse City Film Festival 2012: The energy and excitement of this year’s film festival is more palpable than ever, and was only enhanced by Thursday night’s visit from the incredibly charming Kristen Bell. The young actress, best known for title roles on the hit TV series Veronica Mars and in 2008’s Forgetting Sarah Marshall, stopped by Traverse City Film Festival to present her newest film, Hit and Run.

The film, which can only be described as the most hilarious car chase film you’ll ever see, was written and co-directed by Bell’s fiancé Dax Shepard. Also starring Shepard, Bradley Cooper, Tom Arnold, and Kristen Chenoweth with surprise cameos by Jason Bateman and Sean Hayes, this genius comedy ensemble, most of whom, Bell explained, are best friends in real life, had a packed Lars Hockstad Auditorium roaring in laughter from the first wonderfully-written frame to the last.

Following the screening and to the audience’s delight, Bell, who flew in to Traverse City for only a few hours, came on stage to chat with festival founder Michael Moore and answer questions from the crowd. At a mere height of 5”1’, the actress’s vibrant smile, contagious laughter, and snarky yet humble sense of humor charmed the audience for almost an hour.

Bell, a Michigan native, was born in Huntington Woods, and lived in the Detroit area until she moved to New York after high school to study musical theater at NYU. After working briefly on Broadway, she moved to L.A., where she launched her film and television career. Upon Moore welcoming her back to her home state, she exclaimed, “We Michiganders have to stick together!” And later, she discussed childhood memories of family trips to Traverse City and Petoskey, where she said she loved beachcombing for petoskey stones.

Moore and Bell discussed everything from the nitty-gritty details of film production to the recent loss of the Michigan film incentive, to using Craig’s List to cast a room full of naked, overweight old people for one of the funniest scenes in Hit and Run. Bell then opened up the discussion for questions from the audience, where she explained what it was like making the film. “The film is a bunch of genres in a blender,” she laughed. “I think of it as a car chase movie plus something that explores whether your past has to inform your future,” going on to explain that the relationship between the two main characters, played by Bell and Shepard, was based somewhat on the first year of their real-life relationship. When asked whether or not working so closely with her fiancé ever caused conflict between the two, she replied, “When partners have a common goal—which in this case was to make a great film—it works.” She also told the audience that the actors did 100 percent of the film’s stunt driving and that several of the film’s fastest and most memorable cars actually belong to Shepard. “Yeah, we drive to brunch in that Lincoln,” she said.

Regarding her future work, she mentioned filming season two of the TV hit House of Lies, as well as the upcoming independent film The Lifeguard, which she says will be the darkest project she’s done. “I’ve gravitated toward darker things recently. But I’m also going to be the singing and speaking voice of the next Disney princess, which has been my dream since I was 6 years old. Any human craves diversity, so I like trying new things,” she told the audience. And finally, when asked by a hopeful actor in the front row what the secret is to making it in Hollywood, she told him that it’s about hard work and a good attitude, but also about not letting the desire for fame let you lose sight of why you love acting. “You should be just as satisfied performing in a 50 seat black theater and getting paid nothing,” she said.

Hit and Run will be released in theaters on August 22, 2012. It’s an action movie, a hilariously raunchy comedy, a heartwarming love story, and, best of all, it stars Kristen Bell, who in just a few short hours, stole Traverse City’s heart.