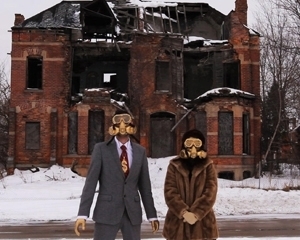 Traverse City Film Festival: Detropia, one of the most anticipated documentaries of this year’s Traverse City Film Festival, made its Midwest premiere at screenings on Saturday and Sunday. The film won a special jury prize for U.S. Films. The documentary is a haunting portrait of a city that once represented the American Dream and that now, with its crumbling buildings and empty streets, stands as a desperate symbol for the national recession and the dangerous effects of corporate power. Directed by Heidi Ewing and Rachel Grady (Jesus Camp, TCFF 2006 and 12th and Delaware, TCFF 2010), Detropia beautifully captures the city’s ghostly landscape, telling stories of Detroit natives who represent the steadfastness of the American spirit. Ewing and Grady, as well as Crystal Starr, a young Detroiter featured in the film, came on stage following the screening for a discussion and Q&A. The directors told the audience that they were nervous to bring the film to Michigan, Grady saying, “It can be quite heartbreaking for Detroiters—they want a happy ending.” Starr, however, who loves her hometown despite its current state of decay, was more positive, telling the crowd, “If we can remember where we came from, that will put us in a place to compete. The solution is to think about your past and history, and that what we did back then to inspire the rest of the world, we can do again.” Following the Q&A, I sat down in the green room of the Old Town Playhouse with Grady and Ewing.

AH: Detroit has been described as “the failure of the Great American Experiment.” If current nationwide social and economic trends continue, is Detroit a foreshadowing of America’s future?

HE: The problems that have faced Detroit are American problems. For instance, the idea of outsourcing is a problem, it’s a national problem. What to do with skilled laborers who have no job anymore? We’re no longer developing our country for the working core. So yes, if trends continue I think that looking to Detroit you can see a version of that happening elsewhere. But also with Detroit, if we can find creative solutions, we could grow from that as well. I think that the country is at a crossroads, and it could go either way, and that’s why it’s an exciting time to make this film and talk about these things.

AH: Heidi, you’re a native of Detroit. How has what you learned while making this film affected you personally?

HE: You know, you’re going to be more connected and more personally invested in someplace where you were born and raised. After you move away, you start looking at things from afar, and see them in a new way. I think making this I definitely rebuilt my connection to the Midwest, to manufacturing. For me it’s a reconnection and a reaffirmation of what I think is important and an appreciation for hard work. It was a nice way for me to reconnect what I grew up with and what I value.

AH: This is the third film you’ve shown at TCFF. What makes Traverse City so special?

RG: Heidi’s been here before, but this is actually my first time, and I’m blown away. I got to go for a ride on a pontoon boat yesterday, and it was like Caribbean waters. I’ve never been on a lake like this; it’s pretty magical, pretty amazing. As far as the festival, we’ve been to a few festivals that have this in common, and they’re always my favorite. It totally embraces the community. It’s very special, and it feels good to not just show your film to appreciative audiences, but you feel like citizens have a main stake.

HE: And talk about an example of a revitalization of a community. I mean, I’ve seen that State Theater for years, and have been looking at it, wanting to go inside. Re-opening it was such a creative way to bring business to a community. All of these things that America is so good at doing, but Detroit hasn’t gotten back to yet. It’s really great to see this happen to Traverse City, and I just love the harmony between the themes in our film and what you see in Traverse City. It hits home in a nice way.

Detropia will open in theaters across Michigan on September 14, 2012, with special premiere screenings at the Michigan Theater in Ann Arbor, the Landmark Main Art Theater in Royal Oak, and at the Renaissance Center in Detroit. For more information, visit detropiathefilm.com.