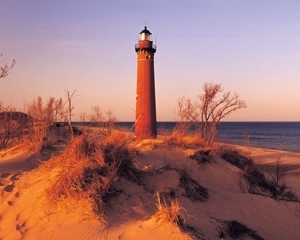 Northern Michigan Vacation: About 112,000 miles ago—and about an equal number of images ago—Ed Wargin set out to photograph the essence of the Great Lakes as the 21st century dawned. We asked Wargin to share a select few photos for our September Travel Issue, and then travel editor Kim Schneider took over from there, giving you a weekend away to each beautiful spot.

He already has 100,000 negatives, give or take a few hundred, to winnow down into a reasonably sized coffee table book and traveling art exhibit. But Ed Wargin still has a few key locations to chronicle on film before he’s ready to pronounce The Fresh Coast Project complete.

After all, the long-time nature photographer is setting out to build what no one before him really has: a body of work that shows the magnitude of the Great Lakes as a whole rather than the piecemeal way he says we normally think of them—our favorite beach, a memorable summer getaway or a cherished town. By doing so, Wargin hopes we come to see the Great Lakes as at least as important to preserve as other national treasures, like the Everglades, Yosemite and the Grand Canyon, that are more clearly lodged in the national environmental consciousness. Or maybe a glimpse of his images, he says, might simply inspire some people, particularly those disconnected from nature, to start their own Great Lakes story—one vacation outing like these, at a time. (Find more images to inspire you at thefreshcoastproject.com).

Like Leland’s marina-side area of repurposed shanties called Fishtown, these boathouses on the canal known as the Narrows between North and South Lake Leelanau convey a rich sense of Michigan’s fishing heritage. The shacks are also artfully evocative, with their blues weatherworn enough to now resemble denim. Float amid such history and occasional wildlife with a pontoon or kayak rental at Narrows Passage Bait and Tackle in the village of Lake Leelanau; Eat: For dinner experience authentic Tuscan cuisine on a lush patio at Bella Fortuna North, Lake Leelanau village; for breakfast, Wargin says he dreams about the homemade oatmeal at Leland’s Stone House Bread (231.256.2577).  Stay: Leelanau Boat Club offers four cottages overlooking the narrows (888.419.2774); Narrows Passage also rents a cottage.

There’s something about the light at the Point Betsie beach, off M-22 just north of Frankfort, a storied place best known for its photogenic beauty-of-a-lighthouse. And though visitors understandably tend to train their camera lenses on the lighthouse, Wargin suggests not overlooking magical details elsewhere, too, say to capture the contrast between the soft waves lapping against the jagged seawall and the glistening of that magic light on the wet surface. Eyes trained for finding treasures, hunt for the local trove—Petoskey stones—or take a late-season dip along the dune-rimmed shore. Eat: Any fresh Lake Michigan catch is a specialty: try whitefish or perch at The Manitou, along M-22.  Stay: The three-night minimum at Chimney Corners Resort on Crystal Lake (231.352.7522) gives you ample time to bike the Betsie Valley Trail and paddle the Platte. You’ll long remember September kayaking among massive salmon on their upstream migration.

Stroll any stretch of Mackinaw City beach between Colonial Michilimackinac and the Shepler’s Ferry dock, and you’ll find this scene that Wargin dubs iconic Michigan. “It kind of wraps up Michigan in a nutshell—water, bridge, peninsula, all there, and with beautiful sunrises,” he says. Summer crowds gone, linger over chats with local grocers and coffee shop regulars, catch end-of-season sales, and hop the ferry to Mackinac Island to canter amid cool breezes and on horses refreshed and ready to help you explore. Stay:  The cedar-sided Super 8 Bridgeview (800.653.0310) is one of many hotels boasting balconies with bridge views. Eat: The pasty, the original Upper Michigan fast food, is fresh baked and authentic at the Mackinaw Pastie and Cookie Company (231.436.5113).

Visitors familiar with this busy lighthouse and beach, smack in the middle of Silver Lake State Park, might think there was either magic or manual manipulation involved in capturing the scene when empty of people. But no Photoshop trickery was used here—or in any of The Fresh Coast Project shots. One reason Wargin shoots the project on film is to convey the state of the lakes at a moment in time, as authentically as possible. To depict the isolation he imagines lighthouse keepers once experienced at Little Sable Point, he simply visited in winter, when cold made for crisp light and kept visitors away. Even in September, though, crowds have thinned enough to help you imagine life here before the lighthouse was right off a handy parking lot and new paved walkway and minutes from family fun options. Stay: Book the lighthouse package at the Sierra Sands Family Lodge (231.873.1008), and your $120 September rate comes with a lighthouse tour and $40 toward dinner at PM Steamers in nearby Ludington.

The Fresh Coast Project By The Numbers

Find this vista halfway between Harbor Springs and Good Hart. It’s one of many jaw-dropping lake views along M-119 as the twisty asphalt hugs a cliff-top path along the Lake Michigan shoreline. Nature mingles with history on a route notable for its thick tree canopy and what Wargin calls the “cottage life tour through history”—modern mansions intermingled with tiny cabins built in the Victorian age. Veering off the famed drive allows even more glimpses back. Explore the ancient cedars and rocky shoreline of a Wargin favorite, Thorne Swift Nature Preserve near Good Hart, or wander amid the white crosses of a native cemetery by the Jesuit Mission church in Cross Village. Stay: The friendly Birchwood Inn (231.526.2151) is just north of Harbor Springs, where the route begins. Eat: Sample farm bounty in both sublime soups and chardonnay at the Garden Café at Pond Hill Farm; check pondhill.com for more on their farm-to-table and wine dinners or the September 14 barn dance.

Many pass the Cut River Bridge on U.S. 2 but miss what lies beneath. Don’t make the same mistake. There’s an otherworldly quality about the spot where the Cut River flows into Lake Michigan, making the walk down a couple hundred steps, give or take a few, more than worth the effort. “You end up walking through a very majestic forest that dumps you down onto the beach, and it’s all soft sand for as long as you can see,” Wargin says. “You really get two worlds in one place.” Eat: Hiking snacks here must include the jerky or fish, slow smoked over a sugar maple fire, from the Cut River Store, a mile west of the bridge. Post-hike, the fish chowder at the Cut River Inn near Naubinway is said to be worth the trip alone. Stay: Settle into a cottage of your own for $65/night at the Hog Island Country Store and Cottages (906.477.9995). To explore galleries of The Fresh Coast Project or to purchase images for framing, go to thefreshcoastproject.com.

If you feel like you’ve stumbled into a fable when you reach the ghost forest of Sleeping Bear Dunes, you aren’t entirely mistaken. Wargin shot this photograph in the belly of the bear, so to speak—the heart of the dune said to resemble the mother in a legend of a mother bear waiting on shore for her cubs. Find this spot by hiking due north from the Lake Michigan overlook on the Pierce Stocking Scenic Drive. The way to experience the essence of the dunes anywhere within the Sleeping Bear Dunes National Park, Wargin says, is best compared to peeling an onion. Take a few extra steps away from the expected route, and let the dunes draw you in with the promise of what waits over the next dune hill. Stay: Grab a first-come, first-served site at the D.H. Day Campground (lovely and easy to score in September!), then bike a new park trail to the famed dune climb, the wide beach at Glen Haven or town of Glen Arbor. Eat: Glen Arbor options abound but should start with a Cherry Mint Chip or Rain Orchard Crunch cone at Cherry Republic.

As if it weren’t enough of a challenge to capture the essence of the entire Great Lakes shore in photographs over a few years’ time—his spare time, that is—Wargin also made the decision to keep his Fresh Coast Project cohesive by shooting all images with the unforgiving medium of transparency film. The tangible nature of film, something you can hold in your hand and, more important, can’t easily manipulate, was key to the project’s aim of capturing a picture of the Great Lakes at a specific point in time—as the 20th century fades and the 21st takes hold. But Wargin found unexpected parallels, he says, between the medium and the subject. Film cameras were a modern invention at the heyday of Great Lakes shipping, sailing, lumbering, and a Great Lakes town, Rochester, New York, is home to the iconic film manufacturer Eastman Kodak—recently bankrupt. “I feel like I’m capturing the tail end of an era,” Wargin says, “both of film and what’s happening in the Great Lakes.”