Northern Michigan: For years, until his retirement in 2008, photographer Robert Cleveland trained his lens on polar opposite worlds. In his work as an advertising photographer specializing in the automobile industry he recorded the latest trends—a glitzy design world that was in nearly constant flux. From the 1964 Classic Pontiac Bonneville to the 2007 BMW, he clicked away at 4,000-pound steel manifestations of planned obsolescence.

On vacations he’d return to Bay View, the community of Victorian cottages on the edge of Petoskey that he’d visited nearly every summer since he was a child. He also traveled to Europe, a place where he saw parallels in the enduring style of Bay View’s cottages. “In Europe I grew to appreciate all of these levels of art history and architecture, of man’s artisanship and craftsmanship represented there,” he says. “It translated and strengthened my love for Bay View and what it represents.”

At Bay View, amid the colorful curvilinear cottages, Cleveland relaxed in the antithesis of the fast-paced advertising world. Over the course of decades, change has barely seeped through the carefully platted neighborhood of winding, terraced and tree-lined streets—a pace that is designed to keep the community firmly planted in the 19th-century values on which it was founded. Bay View began in 1875 as a Methodist Camp meeting site but soon morphed into the Chautauqua assembly it still is today. Chautauqua assemblies were ways for people who shared religious values to come together for a summer of socializing, recreating and bettering their minds through lectures and cultural events—a sort of summer camp for adults. Today, Bay View is one of only a handful of Chautauquas left, a list that includes the original Chautauqua assembly on western New York’s Chautauqua Lake.

Bay View, known formally as the Bay View Association of the United Methodist Church, has had a long history of noteworthy summer visitors and residents. After the battle of Little Bighorn, the family of George Armstrong Custer escaped to a friend’s home in Bay View to mourn him and the many friends and relatives who fought and died with him. Irma Rombauer began to write Joy of Cooking while staying at Bay View. And Vice President Thomas R. Marshall, who served with Woodrow Wilson, vacationed here—even during his terms in office.

But it is the approximately 450 gingerbread cottages and public buildings that most identify Bay View. Year after year, decade after decade, the buildings have enchanted passersby, visitors and residents with their flamboyant color schemes, elaborate scrollwork and porches made for languid afternoons with lemonade. The cottages remain this way largely because the association has strong traditions about changing them. Winterizing is prohibited, as is renovating with some modern materials. Cleveland finds a spiritual parallel to the material rules. “It’s about integrity. Spiritual integrity—visual integrity, ” he says. “If 21st-century materials were introduced you would lose the charm. Some of these buildings with 30 to 40 coats of paint have peeled—they have their own texture.”

Years ago, Cleveland began snapping what he calls sketches of the cottages—recording in his mind, he says, the best times of day to come back and photograph them more seriously. Along the way, he discovered the buildings’ intimate moments—when Calvin the cat basks in an open window, when the scrollwork-framed building date "1888" is mimicked perfectly in shadow against an eave. After his retirement in 2008, Cleveland became more focused on his Bay View project. A sampling of his work is in Mary Jane Doerr’s recent history of the community, Bay View An American Idea (Priscilla Press, 2010, maryjanedoerr.com). During summer 2012, Cleveland’s photos are on display at the Petoskey Public Library through August 24. See “Visions of Bay View: The Exhibit.” 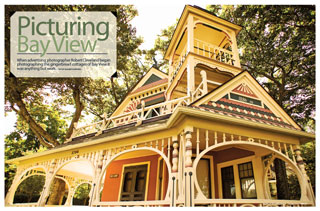