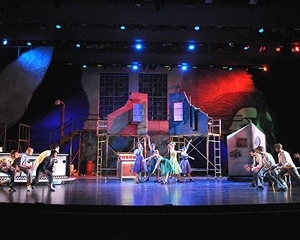 Northern Michigan: It's a once-in-a-lifetime opportunity for high school students! The Interlochen Arts Academy Musical Theatre Department will collaborate with the Tony award-nominated writers of [title of show] to be the first to expand the cast for the hit show, and will then perform at Interlochen Center for the Arts in Northern Michigan and in New York City. (And yes, the name of the show really is [title of show]!)

Hunter Bell, an Obie award-winner and Tony award-nominee, knew that he had found something special when he visited Interlochen Center for the Arts in Northern Michigan earlier this summer. But it wasn’t until he mentioned making a version with an expanded cast of the hit [title of show] that he found out just how important Interlochen would soon become to him.

“On a recent teaching trip to Interlochen, I began a conversation with director Bill Church and told him we'd developed a version of the show for high school students. I saw his eyes light up,” laughed Bell.

Church, the Director of Theatre Arts at Interlochen Center for the Arts, was on the hunt for a forward-thinking musical that he could take to New York as part of the Academy’s 50th anniversary celebrations. [title of show] fit the bill, except for one small problem – it revolved around just four cast members.

“In my chats with Bill, he began to describe ideas he had that include more bodies and talent in the piece that we found so exciting,” said Bell in reference to he and co-creator Jeff Bowen. “With those brilliant ideas, combined with my hands-on experiences with the students and the reputation of Interlochen, we knew this was a serendipitous opportunity to continue [title of show]'s journey.”

And so on Nov. 8, 9 and 10, they will do just that, as Interlochen Arts Academy will present a newly expanded version of [title of show] in Interlochen’s own Harvey Theatre.

“It is unusual for high-school aged students to have an opportunity to expand a show in collaboration with the original creators,” explains Church. “We will be bouncing ideas off of both Hunter Bell and Jeff Bowen as we expand the cast beyond the original four characters. This interaction will give the cast a new window into the creative process and a deep sense of ownership of the final product.”

“The opportunity for our students to travel to New York will be a profound one,” said Church.

About Interlochen Center for the Arts

The nonprofit Interlochen Center for the Arts is a recipient of the National Medal of Arts and the only organization in the world that brings together: a 2,500-student summer camp program; a 500-student fine arts boarding high school; opportunities for hundreds of adults to engage in fulfilling artistic and creative programs; two 24-hour listener-supported public radio stations (classical music and news); more than 600 arts presentations annually by students, faculty and world-renowned guest artists; a global alumni base spanning eight decades, including leaders in the arts and all other endeavors. For information, visit Interlochen online at www.interlochen.org.

About [title of show]

[title of show], taken from the space on the festival’s application form which asks for the [title of show], follows Hunter and Jeff and their friends on their journey through the gauntlet of creative self-expression. In the span of 90 minutes they write and perform their show at a festival and learn lessons about themselves as people, friends and artists. [title of show] is, above all, a love letter to the uniquely American art form of musical theatre and to the joy of collaboration. [title of show] received a Tony Award nomination for Best Book of a Musical in 2009. Book by Hunter Bell; Music and Lyrics by Jeff Bowen.