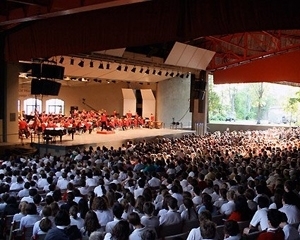 The schedule for Interlochen Center for the Arts' 2012-2013 Performing Arts Series has been released! This upcoming season, audience members have a variety of performances to choose from including Bill Cosby, MOMIX, Coppélia and much more! Peruse the list below and reserve your tickets!

One of America’s most prolific comedians of all time, Bill Cosby has dazzled generations of fans with his comedy routines, iconic albums, best-selling books and the groundbreaking “The Cosby Show.” His comedy transcends age, gender and cultural barriers.

Information, Space and Time: The Arts, Creativity & Learning in the 21st Century

The 45-member Concert Band is the largest and most versatile unit of the United States Air Force Band of Flight. Under the baton of First Lieutenant Daniel W. Boother, the band entertains hundreds of thousands each year with its dynamic performances and varied repertoire ranging from classical symphonic compositions and military marches to Broadway show tunes and popular contemporary music.

Gigantic inflatable’s spring to life in the wonder-filled world of pneumatic wizard Fred Garbo and Brazilian Ballerina Daielma Santos. This delightful duo will inflate your spirits as they inspire you with their whimsical inventions and artistic foolishness. Come experience the show that the Washington Post hails as “A Stunning Mixture of Science and Art!”

Cherish The Ladies: A Celtic Christmas

Celebrate Celtic Christmas traditions with Cherish The Ladies, an all-female band made up of Irish-born and first generation Irish-American performers. The concert will feature gorgeous harmonies, lovely instrumentation and high-energy step-dancing in an evening of time-honored holiday songs and popular carols.

The Interlochen Dance Co. and Orchestra present one of the jewels of classical ballet. An enchanting comedy with old world charm, the lighthearted tale features a love triangle between a feisty village girl, her fiancé Franz and a mischievous toymaker's clockwork doll. "Coppélia" sparkles with sumptuous costumes, spirited music and magnificent dancing.

Have you ever met a talking dog, a real talking dog? Get ready when comedian and ventriloquist Todd Oliver takes the stage – he will introduce you to three of them: Irving, Lucy and Elvis. As featured on “America’s Got Talent,” ventriloquist Todd Oliver’s warm, friendly personality creates a magical family chemistry while the adorable, loveable dogs will make you howl for more!

The dancer-illusionists of MOMIX are known internationally for presenting work of exceptional inventiveness and physical beauty. Magically blending fluid, athletic choreography and riveting music with outrageous costumes, inventive props and pure talent, Botanica is a fantastical ode to the natural world.

No group of child musicians has won more renown than the incomparable wiener sängerknaben, founded by Emperor Maximilian I in 1498. Six centuries later, the famed Vienna Boys Choir continue to delight music-lovers across the globe with their purity of tone, distinctive charm and a diverse, crowd pleasing repertoire that encompasses Austrian folk songs and waltzes, classical masterpieces, beloved pop songs, holiday favorites and medieval chant. Gifted musicians with voices of unforgettable beauty, they carry on the Vienna Boys Choir’s illustrious tradition as the world’s preeminent boy choir.

The Grammy Award-winning, conductorless Orpheus Chamber Orchestra has invigorated international audiences and critics alike with its superior artistry, energy, and distinctive approach to music-making. Orpheus is committed to illuminating both traditional orchestral repertoire as well as new works by contemporary composers in a unique and liberating manner. They will be joined by the two-time MacDowell Colony Fellow, composer and singer-songwriter Gabriel Kahane as well as the Interlochen Arts Academy Dance Co.

In the turmoil of the Vietnam War, an American soldier and a Vietnamese girl fall in love, only to be separated during the fall of Saigon. Their struggles to find each other over the ensuing years present an intensely personal story of the losses we suffer and the sacrifices we make in a world gone mad.  Music by Claude-Michel Schönberg; Lyrics by Richard Maltby Jr. and Alain Boublil.

Tickets are now on sale!

For more information or to purchase tickets, visit their website, call the Interlochen Box Office at 800.681.5920 or visit the Box Office near the entrance of the campus.