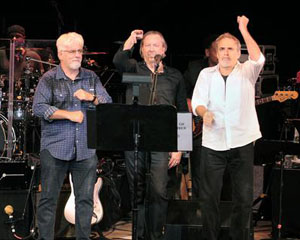 Northern Michigan Events: Expect the unexpected. That’s perhaps the best bit of advice for those heading to the Dukes of September show at Interlochen Aug. 18, according to two-thirds of the stars of the show.

Michael McDonald and Boz Scaggs, who along with Steely Dan vocalist/songwriter Donald Fagen comprise the Dukes, hosted a conference call with about a dozen music journalists before the tour commenced early this summer. They noted that the set list would encompass not only a sampling of their own material, but songs that had influenced them over the years.

“It's kind of all over the map as is the tour we're doing – new set list, the arrangements,” said Scaggs. “It just seems that we can work a little farther field. Everything works. And it sort of gives you a sense of a little more freedom knowing that.

“The band is clicking. And we’re looking forward to trying some new material.” McDonald agreed. “In the first round (2010), I think with this tour, we were wondering how obscure we could get with some of the material. We did everything from Grateful Dead to Beach Boys to the Band. You know, a lot of old soul tunes and things.”

Word is, this time around they’ll be performing a mix of everything from Doobie Brothers to “Lido Shuffle” to Steely Dan classics. But they’ll also throw in anything from Willie Dixon to Chuck Berry to “I Heard It Through the Grapevine,” though as an homage to Gladys Knight, not Marvin Gaye.

McDonald says the opportunity to perform such a wide range of material and not be relegated to playing just his hits is freeing and engaging.

“I think for all us,” McDonald said. “In fact, I've thought many times – looking at Donald – that I think if he were in his happiest state he would be a band leader at some big ballroom in New York with a band like this just doing different material every week. I think that's one that brings him a lot of joy, and I think we all kind of suffer from that a little bit.

“Don't get me wrong,” he continued, “I love playing my stuff and I know Boz loves playing his show. But in this kind of situation you almost get to relive a lot of your musical life. And it seems like in the last few years for me, and I think the same for Boz, just kind of watching Donald too, you tend to go back over all the musical influences that you've had that you've put away, and that they've emerged subconsciously in your own style. But you actively want to look at them again.”

Much of the band is derived from the touring Steely Dan band that performed here last year. Lead guitarist Jon Herrington, bassist Freddie Washington, keyboardist Jim Beard, horn players Walt Weiskopf and Michael Leonhart, and vocalists Carolyn Leonhart Escoffery and Catherine Russell played Kresge last summer, and are joined this time around by drummer Shannon Forest and Jay Collins on sax. They are fronted, of course, by McDonald and Fagen on keyboards and Scaggs on guitar.

Scaggs says the chance to perform the music that originally inspired them and that they cut their teeth on is not only a rare treat, but shows their common roots.

“We all came up I'd say – I can speak for my cohorts, the music that evolved that effected the music that we're reflecting now, certainly, the standards, the great American song book,” he said. “And the music that originated in New Orleans and in the Delta and came up the river and gained a little sophistication and style along the way.

“I think by the same token that the three of us have landed in this kind of pop and R&B vein. So to go back and to go into that domain, particularly from its songwriting aspect, is just a whole new  dimension and a new challenge.” Tickets are still available for the show. Call the box office at (231) 276-7800.