Northern Michigan Community: Do Good and Cool Off with Kona Ice! 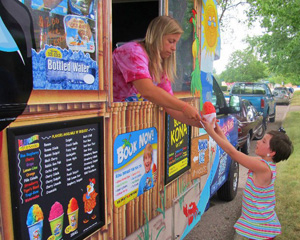 Northern Michigan Community: When the weather turns hot most of us, young and old alike, search for something sweet and cold to cool down with. Over the years we have gone crazy for ice cream, lusted after push-pops and touted the glories of low-cal, low-fat frozen yogurt. But this year's hot weather favorite is more than just a tasty and unbelievably refreshing summer treat–it is benefitting our entire Northern Michigan community. At Kona Ice, Traverse City's most recent food import, Reggie and Jason Wojtal are serving up Hawaiian shave ice for a cause.

For those who haven't heard of Hawaiian Shave Ice yet heres a quick tutorial: first of all, it is always shaveiced never shaved. Secondly, it is not a snow cone. Shave ice was brought to the Hawaiian Islands by Japanese explorers, and is shaved not ground so it doesn't melt as quickly and absorbs more flavor. Flavored syrups (traditionally tropical fruit varieties, but Kona offers modern hybrids like the popular banana colada and the mysterious "tiger's blood") are poured over the ice and sometimes topped by a "snow cap" of coconut milk. As the MyNorth staff found out at Jason and Reggie's visit last Friday, the result is sweetly flavorful, cooling, and fun to eat.

Although shave ice may be completely new to the Traverse City area, Jason Wojtal is not. As a child, the Chicagoland native came up to Northern Michigan every summer with his family. After having spent the beginning of his adult life as a supply chain manager and software advisor for Fortune 500 companies, Jason said it was "just a matter of time" before he introduced his new wife Reggie and their five children to the relaxed Northern Michigan lifestyle. But how, he and Reggie mused, would they find a way to support themselves, involve their family, and fulfill a shared lifelong dream of doing something that gave back to the community? On the phone one day, Reggie almost jokingly said she would love to own a Kona Ice franchise, something she often ate with her children in their southern Indiana home. And in the time a normal snow cone would have melted, Reggie and Jason were researching how to join the Kona family.

It was fated to be. After some preliminary research Reggie and Jason found that the Kona headquarters were located literally down the street from Reggie's house. Cut to this past February, and the two were graduates of "Kona Kollege" were outfitted with a brightly colored Kona Truck that Jason describes as "an ad on wheels" and headed North.

A little bit about Kona–started Tony Lamb, a family man not unlike Jason Wojtal, the company is focused on giving back to the community. In the past three years, Kona has given over three million dollars to non-profits. Kona trucks and carts are regular fixtures at charity events, sports games, birthday parties and corporate events. No matter where they are serving though, a part of the funds is donated to non-profit organizations. Already Jason and Reggie have set up meetings with the Traverse City Area Public Schools and other groups to cater events and hope to make their first donations as soon as possible. It is essentially effortless for the organization holding the event and is assured to raise funds.

This year make sure to look for Reggie and Jason at the Traverse City Film Fest and other events, as well as on their daily trips through the Traverse Area. Trust me–their truck isn't hard to miss and you may or may not be hooked on Kona Ice.

Check out Traverse City's Kona Ice on their Facebook page!

Keep in touch with the Northern Michigan community at MyNorth.com!
X
X