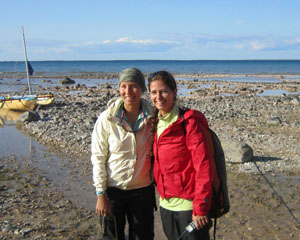 Northern Michigan Boating: In elementary school young Michiganders hear the tales of French fur traders of old, who circumnavigated our Great Lakes in carved canoes and gave “Traverse City” its name–from the French verb traverse, to cross over. You can picture these proud lake-warriors, crowned with beaver and tall in the prow of a wooden canoe with the wind in their face; an icon of the then young American West. But, it has to be said, undeniably a boys club. History class never included femme navigators or ladies of the lake. I am happy to report however, that that is about to change with the birth of a new generation of canoe explorers. Please welcome to the Lake Michigan stage–The Dugout Girls.

The Dugout Girls are best friends Amy Lukas and Mary Catterlin, of Beverly Shores, Indiana, who met at Michigan City High School and bonded over a love of Lake Michigan. Self proclaimed “life long beachers” the girls often took canoeing day trips together. Now post grads (Amy from Valparaiso and Mary from Indiana University) they have decided to kick off their adult lives with a 1200 miles canoe trip circumnavigating Lake Michigan, in a canoe that Mary carved herself from a cottonwood tree. “I wanted to have a boat that I could call all my own, that I made,” Mary said. “It wasn’t even until I was a year in to the project that we thought about circumnavigating the lake.”

But after two years of cross-continental planning (Mary was in California) and research on similar trips, Mary and Amy decided it was time to test the waters. I was lucky enough to catch the ladies at one of their rare moments of down time, and spoke with them from the home of a friend in Cross Village.

The trip began on July first, when Amy and Mary took off from Beverly Shores and began to canoe up the Indiana side of Lake Michigan, past Wisconsin, stopping to camp on Washington and Rock Islands. On Washington Island, the girls experienced that the best laid plans are easily set aside by tempestuous Michigan weather when they were weather bound for around a week with nothing to do but hunker down and wait for the winds to change.

Amy and Mary’s on-the-lake lifestyle is far more rustic than most college-age women would ever volunteer to endure. These Dugout Girls are tough. They travel lightly–packing the cottonwood canoe with four life jackets, sleeping bags and a tent (all in dry bags of course) and a week’s worth of food. Once a week they stop to pick up the packages of food shipped to themselves at post offices carefully selected to be around 75 miles apart and close to the shore line. Most nights, they camp at shore-side campgrounds, where they have met some fellow explorers like Scott Galloway. Galloway is completing a similar trip, but counter clockwise to the girls. On Washington Island, they swapped stories of sunburn and water conditions and what lay ahead of them, like a tough canoeing club. Both Amy and Mary undertook serious physical endurance training before the trip. This is not girly boating.

Every once in a while though, they come ashore to stay with a friend of relative–or as, they said “the friend of a friend of a friend”, networking as they go– to touch base with the world. While both women say the break from the usual barrage of technology is refreshing, they do like to check their email on their smart phones and update their blog, which follows the trip, from internet cafes. On the water they are both keeping daily journals and taking as many photos and video segments as possible. Someday, a Dugout Girls book may emerge.

And what is next for Amy and Mary? Applying to graduate programs, and in the meantime looking for a “random fun job”, possibly in something that has to do with water. When I asked them what they would miss the most they unhesitatingly replied “being on the water.”

As lifelong devotees of Lake Michigan, they will miss the sunsets (something they were accustomed to seeing over the Chicago skyline, but have a whole new appreciation for now) and shockingly red moonrises over the water, the fresh air and the quiet.

“It might be claustrophobic, being inside now. I just want to be outdoors!” Amy said in her surprisingly sweet and young voice. I assured her that this is a sentiment I think most Northern Michigan lovers, “beachers” as the girls would call us, share with these new age voyageurs.

Keep track of Amy and Mary on their blog, Lake Michigan in a Dugout!