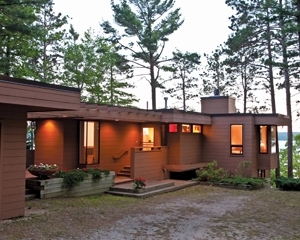 Northern Michigan Architecture: According to William Gilmore, “Any architect who designs a house for himself has a very difficult client.” The award-winning architect and former design director at the firm Dow-Howell-Gilmore in Midland knows this well because in 1970, he became his own most demanding client. And that is saying plenty: Gilmore had his share of demanding clients while working as a partner of renowned architect Alden Dow, who was himself an apprentice of Frank Lloyd Wright.

Nevertheless, with high expectations and a penchant for detail, Gilmore and his wife, Karen, set out to build a relaxing retreat in the Crystal Lake area for their family of four. Their meager budget of $15 per square foot was a serious challenge, even back then.

The Gilmores combined their talents and pulled it off, spending summers with their sons at the dramatic but quiet bluff-top site on Crystal’s north shore. Now aged beautifully into its woodsy site and expanded a bit for a total of 1,900 square feet on two levels, the modernist dwelling is a full-time home for Bill and Karen. It’s a work of graceful design and brilliant engineering, perfect for them in both function and appearance.

Bill explains how he met the strict budget by designing spaces on a four-foot module to make the most efficient use of stock materials, siting the house carefully to minimize excavation and avoid the need for air conditioning, and innovatively using inexpensive materials. The interior walls, for example, are paneled with Philippine mahogany lauan. “That was a very inexpensive material at the time,” says Bill. The effect is rich and luxurious.

The best place to take in the miles-long view is on the cantilevered deck that reaches over the bluff and displays a tree-filtered view of Crystal Lake, almost in its entirety. The deck bounces slightly under foot—unsettling until Bill explains that it was engineered to flex in order to withstand strong updrafts from Lake Michigan, as well as the weight of 40 adults. In profile view, the structure is a floating form that appears to have quietly descended from the sky.

Together, Bill and Karen designed the interiors, including most of its furniture, with a goal of clarity and cohesiveness from exterior to interior. A neutral color scheme is punctuated with accents of vibrant red and yellow in pottery and Scandinavian glass pieces displayed in perfectly lit niches. The look is simple and sleek, allowing the view to take center stage in every room.

Bill’s architecture portfolio includes many large and exciting projects that have been published throughout his career. During his time working with Alden Dow, he designed everything from 1,000-square-foot cottages to a 500,000-square-foot research center.

“Alden’s influence was great on anyone who worked for him,” says Bill. “He was such a strong design leader and probably the best architect to come out of Taliesin [Frank Lloyd Wright’s Wisconsin studio].”

Despite Bill’s high-profile work on large commercial buildings and grand homes, it’s this humble house that has kept him enthralled all this time. He just recently designed and installed a set of wooden light fixtures along the driveway. Details … always the details.

See this article in August/September 2012 Northern Home & Cottage, included in August 2012 Traverse, Norhtern Michigan's Magazine. Click here and have both delivered to your door for only $4.95 (shipping included).