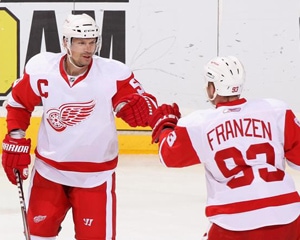 Note: Detroit Red Wings Executive Vice President/General Manager Ken Holland announced that the Red Wings have cancelled host their annual NHL Prospects Tournament at the Centre ICE Arena in Traverse City, Mich. Due to the uncertainty surrounding the collective bargaining agreement and the advance commitments required from the various parties including hotels, airlines, teams, players and their families, etc. the Red Wings have determined that it is in everyone’s best interest to cancel this year’s tournament. The Red Wings and the seven other NHL teams that were scheduled to participate are committed to returning to Traverse City in 2013 and continuing with this tremendous tournament.

Purchase tickets and you can check out the daily Red Wings activities going on at Centre Ice!  September 22nd and 23rd watch the Red Wings' practices and scrimmages, September 24th and 25th witness the Red Wings in action as they play games; September 26th and 27th see the Red Wings end their Training Camp with final practices. Your ticket will give you seats to watch the play and access to the meet-and-greet and autograph signings after. There will even be a special line just for the kids so they can be the first to receive a Red Wings autograph!

Executive Director of Centre Ice Arena Terry Marchand says the Red Wings "are treated well by our volunteers and Traverse City, and love coming up here as much as we love having them."

Ticket sales have not yet been released, so keep an eye on the Centre Ice Arena website's homepage, where tickets can be purchased the day they are made available by the NHL Player's Association and owners. Ticket proceeds benefit Centre Ice Arena, a 501-C Non-Profit.