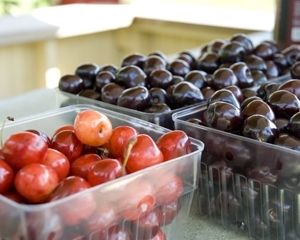 Calling all chopper fans! The National Cherry Festival is going to have a Paul Jr. Designs Chopper at the Open Space on Saturday, July 7 and the at the Festival's Classic Car Show on Sunday, July 8.

Golfers! How would you like a chance to win one million dollars. That's right – one million dollars! Come out to the Bay Meadows Golf Course and take your best shot at a hole in one July 7-13. The closest to the pin qualifiers will return on Saturday, July 14 for a shot at a cool million.

Visit Traverse City's own favorite amusements at the corner of Grandview Parkway and Union Street. Ticket prices are $1.25 each or $20 for 18 tickets.  Each ride takes 3 – 4 tickets.

Cool off with a cold one and enjoy views from "Traverse City's Coolest Bar on the Bay" at the 21+ beer tent.  Choose from local and regional beers, wine and more to sip, an enjoy views of West Grand Traverse Bay, all while listening to nightly entertainment streaming from the Bay Side Music Stage! The Beer Tent Stage will also feature live music throughout the afternoon and happy hour.

A look back in time, from the first "Blessing Of The Blossoms" and its journey to what we know as today's National Cherry Festival.

Go for the Gold Pin is Back

Nothing starts the week better than a good breakfast! Join the National Cherry Festival Poobahs at the Traverse City Open Space for pancakes, sausage, coffee, milk and juice, plus a chance to meet the Air Show Pilots.

On your mark–get set–go! to one of the most popular of all the National Cherry Festival kids' events. Registration is 9:00-9:45 a.m. with no fee required. Equipment will be available for out-of-town guests. No rubber wheels or altered wheels for added traction will be allowed. For ages 3 to 6.

Two-person tournament play on the beautiful beaches of West Grand Traverse Bay. Saturday's tournament features Men's and Women's play, with 18 teams per division.  Registration is full for 2012.  Good luck to all the teams!

One of America's great pastimes featuring cash prizes. Must be 18 years and older to play.

Stroll around Union and Sixth Street in Traverse City for a spectacular look at hundreds of gleaming, show-conditioned collector vehicles primed for judging at the National Cherry Festival Old Town Classic Vehicle Show.

Calling all kids and teddy bear companions! Bring your favorite bear and blanket for a fun filled afternoon in the park. Enjoy story telling, making a teddy bear craft, and of course an afternoon tea party with other teddy bears and kids. Parents are welcome.

A fun time on the beach with sand sculpture competition for families, groups and individuals ages 13 and up. Only items found on the beach may be used in the decoration of the sculpture with the exception of food coloring. Register on site. No fee required.

Known for their love of University of Michigan’s ‘Big House’ Football Stadium through their hit single ‘In the Big House’, POP EVIL will rock the Festival’s Bay Side Stage. ‘Since re-releasing their first record in 2008, Pop Evil has developed their following the hard way. They have toured the US continuously since their first release, playing nearly 400 shows in two years and only taking time off to record their new album, War of Angels.