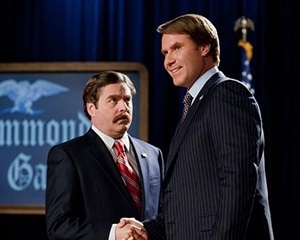 Traverse City Film Festival: This just in! Added screening: A Hollywood Sneak Peek of "The Campaign!"

The premiere of "The Campaign" will be taking place on Saturday, August 4 at 6:15 pm at the State Theatre in Traverse City. Starring Will Ferrel and Zach Galifianakis, this blockbuster comedy is expected to have filmgoers rolling with laughter. The director of the film, the great Jay Roach (“Austin Powers,” “Meet the Parents”) will also be present! Tickets for this special event will be $15 and they are on sale now!

In addition to the "Susan Sarandon is Coming" surprise announcement last week, we are pleased to announce today that we are adding new screenings of two sold out movies:

Film festival tickets are being snapped up right and left and sales are ahead of last year. But… at this point there are still hundreds of tickets available for more than half the films!

A note of clarification: When you go online to order tickets for the free morning panels at the City Opera House, it says they are not available for "pre-sale." The Traverse City Film Festival is going back to the old way of "show up at the door that morning." A few tickets were given away in error last week, and those tickets will be honored, but they ask that people (even those with existing tickets) arrive at 9 am for the Susan Sarandon panel, which is sure to be a sell out, and to arrive no later than 9:15 am to guarantee admission.