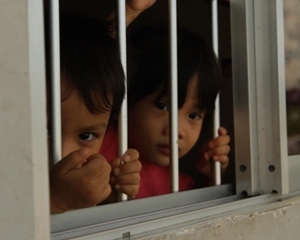 Traverse City Film Festival: Stuck is a documentary that “exposes how the current system is damaging children, discouraging adoptions and how we need to fight for the rights of children to grow up in a family, not an orphanage.”

“There is a silent crisis happening where millions of children are languishing in subpar orphanages during their most formative years because of the red tape of governments, including our own,” said Craig Juntunen, founder of Both Ends Burning Foundation after his own experience with adopting children from Haiti in 2006.

“We created this documentary because people need to know how dire the situation is and how we have a responsibility to defend the rights of every child to grow up in loving families. Countless families would love to adopt a child, and estimates say there are at least 10 million children stuck in orphanages. Supply and demand isn’t the problem; it’s the process that is hurting the children.”

Stuck will be playing at 9 am August 3, 2012 at the Old Town Playhouse. Craig Juntunen will also be there to answer questions. Tickets are on sale now!