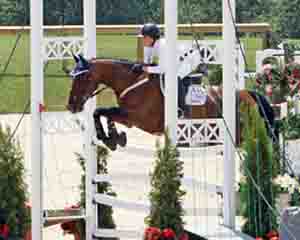 Traverse City Events: It's Red, White and Blue Day on Saturday, July 28, 2012 from 8:00 a.m. to 7:00 p.m. at Traverse City's Horse Shows by the Bay! The flag will be flying and the public is encouraged to wear their red, white and blue to show support for the U.S. Olympic Equestrian Team. All proceeds from Saturday's gate admissions will be donated to the Team Foundation, a donation that will be matched by Flintfields Horse Park owner, Karin Flint.

At 5:00 pm during the D-Braider Cherry Capital Classic Grand Prix, photos and videos of the “Good Luck in London From Horse Shows by the Bay” message will be taken and sent to the U.S. Equestrian Teams. Visitors will also be able to watch Olympic Silver Medalist Lisa Jacquin, who is entered to compete.

Past and future Olympians have participated in the Show since its onset nine years ago, including medalists Chris Kappler (U.S. Team) and Beth Underhill (Canada Team).

Horse Shows by the Bay is held at at Flintfields Horse Park, 6535 Bates Road, Williamsburg, MI

About Horse Shows by the Bay