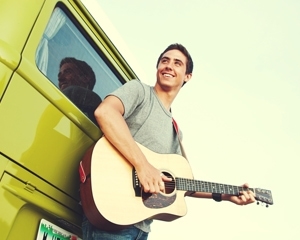 Northern Michigan Events: Spend any time in Northern Michigan and you're bound to notice the almost ridiculous number of seriously talented and creative individuals who live here. In one way or another, they have been inspired by the beautiful area in which we live. The result? Amazing art. Be it the poetry, painting or any of the musical performers we are citing in this list of July's live entertainment, Northern Michigan has a way of taking already unbelievable creativity to the next level. What is even better is that all of this art is so accessible. To make it even easier to enjoy the impressive local music scene, we've compiled a list of July's remaining live performances–the majority of which are free of admission. Enjoy amazing music, great venues and a lot of local charm at any of these performances.

All performances from 5-9 p.m.

His soulful lyrics and gentle tones will complement your dining experience well. To sample some of Jim's music click here.

This Michigan band is often seen at Shimmer's night club in Traverse City and other Northern Michigan haunts. Their classic rock and funk never fails to please a crowd!

A local artists who now returns to the Blue Tractor after performing with musicians such as Jake Stevens. Arnold is a vastly talended singer/songwriter who transitions easily from one genre to another, adding creativity and expertise to every new undertaking.

The Traverse City DJ proves that there is more to him than just his spinning skills and quick banter, bringing his artful guitar strumming and vocals to the Blue Tractor for an evening of fun musical enterainment.

Songwriters in the Round

A group of local songwriters who regularly perform together, rotating time in the spotlight and building off each other's energy to create some of their best new material.

Local father-daughter team who have developed a style all their own. They are known throughout Northern Michigan for creative guitar stylings and beautiful vocals.

Brant is a local singer/songwriter whose folk guitar and self-forged lyrics have been compared to John Prine. A regular performer at Horizon Books, he is joined by his "friends" all talented local musicians.

One of the best open mic nights in the Traverse City area now offers even more. The Roudup Radio Show, Northern Michigan's only live variety radio show, is recorded every Thursday night at the Hayloft before its broadcasting on Saturdays at 7 a.m. and Sundays at 5 p.m. Order a drink, soak in the rustic atmoshpere and put your boots up while you enjoy the best in local bluegrass and country twang.

Local musicans Stargardt and Stegnetta are both talented jazz musicians–joining them for an evening of keyboard and vocal focused jazz is to almost be transported into the heart of New Orleans.

Ron Getz is a renowned guitar player who has performed throughout the U.S and Europe. Laurie Sears is a talented saxophone and flute player. Together the duo will create lovely music!

Find out more about Hipps and Ricco online!

David Chown, leader of the "Lookout Cats" and keyboardist, and Elizabeth Sexton Rivers have been working together in Northern Michigan for more than eighteen years. They have covered musical material ranging from big band swing to R&B.

Jazz pianist Al Jankowski and indie-pop rock goddess Miriam Pico may sound like an odd combination; but together they have created a new sound that is funky, energetic and dynamic.

A pop and soul songstress who has been compared to Alicia Keys, this Traverse City native is a energetic preformer who peppers her creative songs with punchy hooks and truthful lyrics.

Ron Getz is a renowned guitar player who has performed throughout the U.S and Europe. Laurie Sears is a talented saxophone and flute player. Together the duo will create lovely music!

They call themselves the "best acoustic rock duet this side of the Mississippi" which is reason enough to check them out!