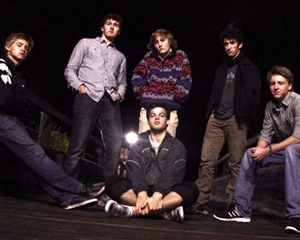 Northern Michigan Events: August is the more relaxed part of a Northern Michigan summer, when the heat lasts throughout the day and leaves the evening as a cool respite from the day's activities. As you wind down your fun filled days, let your August evenings be filled with the sound of local musicians. Check out the list below to see a compilation of some of the best places to see live music!

A Traverse City native, Andrew skillfully combines jazz, acoustic and pop into an enjoyable performance. To sample some of Andrew's music click here.

A local artist who returns to the Blue Tractor after performing with musicians such as Jake Stevens. Arnold is a vastly talended singer/songwriter who transitions easily from one genre to another, adding creativity and expertise to every new undertaking.

A Traverse City native, Andrew skillfully combines jazz, acoustic and pop into an enjoyable performance. To sample some of Andrew's music click here.

This quirky duo of local girls have been a Northern Michigan favorite ever since they joined forces. They have been praised for their witty and original song writing as well as their folky beats. To sample some of their music click here.

Rose's beautiful voice and melodies will certainly charm! Listen to some of her songs here.

This quirky duo of local girls have been a Northern Michigan favorite ever since they joined forces. They have been praised for their witty and original song writing as well as their folky beats. To sample some of their music click here.

This four member band (previously Seldomtone) is an amazingly talented group of high school sophomores who do all their own original music!  Don’t let their age fool you, because their sound and style is mature and marvelous!  The musicians are:  Logan Dell’Acqua – Vocals and Piano,  David Stone – Drums, Jake Myers – Bass Guitar, and Fisher Diede – guitar.

Bret von Lindenberg is a blended genre singer-songwriter that hopes to open doors to self discovery through his music.

Songwriters in the Round

A group of local songwriters who regularly perform together, rotating time in the spotlight and building off each other's energy to create some of their best new material.

Join local guitarist and DJ Matt Mansfield as he hosts open mic night. Are you a musician, songwriter or singer and want to get some performances under your belt? Then you definitely need to be here! If performing isn't your thing, audience members are also wanted!

"Ethereal Gypsy" music that will have you swaying to jazzy beats the whole performance!

With a recently released album under their belt, this talented group of twenty somethings include Andrew Sturtz on lead guitar and vocals, Alex Gusler on drums and Sam Messina on bass. To sample their new album click here!

Don Julin is a talented Michigan instrumentalist who has performed all over the US and Europe as well as being featured on NPR's All Things Considered.

Enjoy live jazz while sipping some of Poppycocks' delicious cocktails!

Come and get down to a Michigan based "truly original form of high energy electric-funk-jazz-fusion."

Inspired by his Florida roots Will Pearsall is an Americana singer and songwriter that transports you to the swamps of Florida with his music. To sample some of his music click here.

This very talented harmonica player graduated from Berklee College in Boston and continues to showcase her musical talents all over the U.S. To sample some of Trina's music click here.

This traditional bluegrass Michigan band has traveled all over the country to perform (including New York subway stations.) Check out their music!

Original singers and songwriters make the music of Valentiger upbeat and unique. Listen to some of their music.

This folky duo have brought their songs all the way from their farm in Texas. Sample some of their music here!

This Northern Michigan band reminds audiences that music and love are both still strong and alive. Check out some of their songs here.

Listening to their upbeat and toe tapping music will put you in a happy mood for the rest of the evening! For some of their music click here.

Performing out of the American Songbook, this band is inspired by Ella Fitzgerald, Frank Sinatra, Johnny Mercery, Nat King Cole and many more! Check out their Facebook page!

A band that is both inspiring and fun to watch. This group knows how to create a strong audience connection through both their songs and humor.

Kraig is a slide guitarist who puts on a great show!

This group of musicians all have impressive resumes as soloists and combined they make up quite an incredible group. To hear and read more about the group click here!