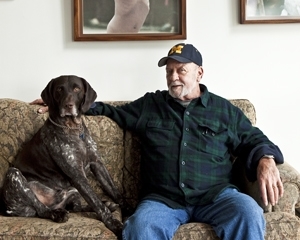 Northern Michigan: When Traverse Magazine last checked in with Dr. Napoleon Chagnon, perhaps Traverse City’s only resident who has inhaled hallucinogenic drugs with stone age Amazonian natives, he was struggling to preserve his academic reputation. A bestselling book and later a documentary had charged Chagnon (along with his then-colleagues from the University of Michigan) with wantonly, even deliberately, starting a deadly measles epidemic among the Yanomamö Indians of Brazil and Venezuela. Toss in some raging academic controversies (does man’s DNA wire him to be violent?) and it meant Chagnon was fighting what could have been, forgive us, his Waterloo. But Chagnon, who spent a scrappy rural Northern Michigan childhood defending his first name (“Ever heard of the Johnny Cash song ‘A Boy Named Sue?’” he asked me over a beer at Patisserie Amie in Traverse City recently), learned early to come out swinging. This time, however, his defense was a handful of scientists and scholars who cleared Chagnon’s reputation and defended his research in academic papers.

The upshot? Chagnon was recently elected to the prestigious National Academy of Sciences. Call it exoneration extraordinaire. Needless to say, the good doctor is happy. And all that publicity has the powers that be at Simon & Schuster smiling. The publishing house will release Chagnon’s autobiography, Noble Savage, in January.

This article was originally featured in the July 2012 issue of Traverse, Northern Michigan's Magazine. Order your copy at MyNorth.com!