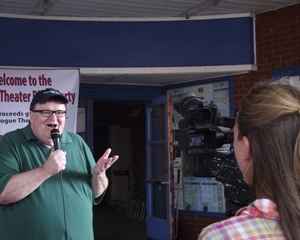 Northern Michigan: As an active member of the renovation team for the Vogue Theatre, Tim Ervin shares some of Michael Moore's back story when it comes to restoring this historic part of Manistee, MI:

I learned that Michael Moore and I both watched The Carol Duvall show as youngsters, fascinated with how she made wonderfully artful and useful things with such ease. Now a Manistee County resident, Carol met Michael at a July 27 fundraiser to reopen Manistee’s Vogue Theatre. Like over 500 others, she volunteers time to support the project that is a game changer for the city.

Michael led the charge in launching the restoration campaign on February 11, 2011. Now, he was returning to help wrap up the fundraising so that the theater can be restored and open for movies and buttered popcorn by this Christmas.

Michael generously gave his time to all that attended, talking with each person as though they were the only ones in the room. Several came to donate money. Like 5-year old Luke Herberger who donated $30 from his lemonade stand. Michael told him that he would grow up to lead the City.

He sat and talked with Ted Arens, Vietnam vet and successful business owner, about his deep concerns for the treatment and welfare of military veterans. Michael told him how the State Theatre has been able to thank active military members with free admission.

He exchanged memories with former high school classmate Marilyn Barker and recognized her, as publisher of the Manistee News Advocate, for dedicating coverage to the Vogue since the February 11 kick-off.

He shook the hands of Vogue volunteers, like Jim Draze who sits on the nonprofit board overseeing the restoration and Deanna Draze who has written successful grants to accomplish the work. He expressed gratitude to Kathy Huschke from the Oleson Foundation and Bob Gluchewski, representing the Consumers Energy Foundation for the grants their organizations have awarded.

He talked with the former and current CEO’s of West Shore Medical Center, Burton Parks and James Barker, about how the restored Vogue, as Manistee County’s only theatre, would aid in recruiting physicians and their families.

“Let’s get this done,”  was the gauntlet Michael Moore laid down, along with community members on July 27 in a news conference under Manistee’s Vogue Theatre marquee and then at the fundraiser hosted in the Ramsdell Inn’s lobby.

While presenting more restorative challenges than Traverse City’s State Theatre, the goals are the same: to restore the 1938-built Vogue Theatre and revitalize a downtown through volunteer-led, community-driven work.

The intended result: a marvelous, affordable entertainment experience for all that will ramp up the downtown economy.

The call to action is bold: to raise a minimum of $300,000 now to begin construction by Labor Day to join Moore at a packed house before Christmas to celebrate the very first film. Moore has donated his time to oversee programming movies for the Vogue, just like he does for the State Theatre. And on July 27th, he even wrote a personal check of $10,000 for the good of the cause.

“Whether you live, work or play in Manistee County or are within a day’s drive, I am calling on individuals, public and private foundations and others to join us in getting this done,” Moore said.

Michael Moore has a vision and an inspiration that community theatres like the State and Vogue can be restored and launch the rebirth of downtowns throughout Michigan.

To do this, Moore says, communities must believe in themselves and never give up.

“If that’s trouble then that’s exactly what Manistee and other communities need,” LaPorte says. “It’s this kind of trouble that will bring us back together around the comeback of our theatres, nurtured by our need for the old fashioned joy of going downtown to go to the movies.”

To help reopen the Vogue, contact the Manistee County Community Foundation or 231-723-7269.

Tim Ervin has been an active member of the Vogue Theatre restoration initiative.