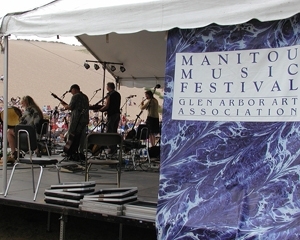 Northern Michigan wine has become a pretty big deal over the last couple of years and it's because of places like Leelanau county that the reputation is excellent. Celebrate Northern Michigan wine properly at the annual Leelanau Peninsula Wine Food and Music Festival this Saturday. Located in Suttons Bay at Marina Park, this year's festival features 16 wineries, 8 food vendors, one brewery and one hard cider vendor. Tickets are $15 and include an etched wine glass and two drink tickets. While you are in Suttons Bay check out the Inland Seas Summer Festival which is in collaboration with the festival. There will be workshops and demonstrations all day long as well as a wooden boat show and much more!

Check out the full article online!

The Manitou Music Festival turns 21 this year! Founded in 1991 by members of the Glen Arbor Art Association, the Manitou Music Festival celebrates the beauty of Leelanau County and the way it has inspired artists, writers, musicians and just plain folks for generations. The Festival offers classical, jazz and folk concerts featuring both national and local performers.

On Sunday, July 22 at 8 p.m. the RFD Boys will be performing at the Studio Stage at Lake Street Studios (6023 S. Lake Street, Glen Arbor). Their upbeat bluegrass has just on improving over the four decades that the Boys, lead singer Charlie Roehrig on guitar, Paul Shapiro on bass, Dick Dieterle on fiddle, and Will Spencer on banjo and Dobro, have been together.

Children under eighteen are free!

You couldn't ask for a more beautiful setting to enjoy world-class music. On Thursday, July 26, 7 p.m., at the top of Bay Mountain at the Homestead (Woodridge Road off M-22, Glen Arbor) the Paul Keller Quintet  will preform featuring vocalist Sarah D’Angelo. An off-shoot of the Ann Arbor based Paul Keller Orchestra, the quintet specializes in well-known jazz classic like Goodman and Gershwin. The preformance is augmented by D'Angelo's rich vocals.

Celebrate the 160th anniversary of the Village of Omena this Saturday! This momentous occasion will be marked with the Mayor's Parade at 11 am, plenty of food, balloon rides and much more! Come at 11 am to watch the parade and to see the new mayor sworn in at the end, only the second in the history of Omena.  Not only will the village be commemorating a big anniversary Tamarack Gallery in Omena will be also be celebrating 40 years in business!  To celebrate the anniversary "Garden Studio" an oil pastel painting will be given to the winner of a drawing that will take place on Saturday, click here to enter.

Run this fun 5K that takes you on a loop through Leland while supporting Fishtown! All proceeds benefit the non-profit Fishtown Preservation Society, and runners enjoy spectacular views of Lake Michigan and the Manitou Islands.

From July 24-29 2012, Lake Michigan's Beaver Island will be awash with the sounds of the baroque period, classical melodies filling the air like a Viennese music hall. The Baroque on Beaver classical music festival is a week of the world's best classical music, visiting artists enjoying one of Lake Michigan's most beautiful islands, impromptu concerts held throughout the town and more. Began in July 2002 when a small group of musicians gathered in the log cabin chapel of St. James Episcopal Mission to preform Bach, the festival now includes more than sixty Michigan musicians performing as soloists, in small ensembles, a Chamber Chorale, the Festival Chorus and a full orchestra. The Festival Orchestra is conducted by Robert Nordling; Kevin Simons leads the Festival Chorus.  All events except the Opening Gala are free, but contributions are appreciated.

Find this summer's line up online!

In its 8th year, the Traverse City Film Festival has always lived by the motto "just great movies" and this year is no exception. The list of movies that are going to be played, discussed, analyzed, loved, re-watched and change lives is pretty awesome! Go through the variety of cinematic pleasures that are compiled and decide on one (or many!) that suit your fancy. In the words of Founder Michael Moore, "see as many movies as you can. Then go see more. This is the year you were meant to set a record." This year's Traverse City Film Festival runs from July 31st-August 5th, 2012.

Celebrate Northern Michigan's Alpine history in the town of Gaylord, not far from Traverse City at the 48th annual Alpenfest! This is a truly community oriented festival with children's games, a carnival, traditional Alpen food, live entertainment and the World's Largest Coffee Break.

Learn more about the 2012 Alpenfest online!

At the Southside Festival Grounds in Buckley, not far from Traverse City, something spicy is being cooked up! The Traverse City Area Blues Festival has brought in world renowned artists from Chicago, Montreal, Mississippi, Los Angeles, Detroit and New York to preform this weekend, as well as guest DJ's and International BBQ organizers from the prestigious Kansas City Barbecue Society.