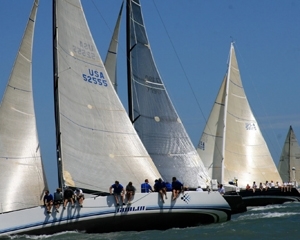 Mackinac Island Events: Earlier this week I spoke with David Gerber, a long-time sailor in the Chicago Yacht Club Race to Mackinac and a Traverse City resident since 1994. While the rest of Northern Michigan is busy preparing for the upcoming frenzy of the Fourth of July, National Cherry Festival and the Traverse City Film Festival, David and his crew remain suprisingly calm just a few short weeks before taking on this year's Mac.

Where does this zen-like approach to freshwater sailing's most competitive and well known events come from? A quintessentially Northern Michigan attitude towards sailing, and in extension, life–keep it simple.

Gerber completed his first Race to Mackinac Island in 1988, making this his twenty-fourth race, and the fourth year for his current crew, which mans the "Flash Gordon." Though the crew members hail from all over the country, they are all the best of friends, an element that Gerber says is essential to having any chance of a winning time. "Racing with friends," explains Gerber, "is one of the keys to winning. You build up this amazing trust. Last year, there was a massive thunderstorm, but we all had a sense of safety because we could trust one another to do their job and work their hardest."

The "Flash Gordon," a 40-foot boat owned by architect Helmut Jahn, may be fast (last year the crew pulled in to Mackinac Island in about 36 hours!) but it doesn't offer much in luxury amenities. Gerber says "It's not a cruiser; we have a 3 burner stove top, no ice–it adds too much weight–and bring only dry foods like nuts and dried fruit. The only hot things we eat are tea, coffee, and maybe a cup of soup. We keep it simple."

This basic approach, which extends from just provisions, is what makes getting ready for the Mac a "turn key operation" for Gerber and his crew. They bring aboard their three duffle bags of safety equipment and they're ready to get going on Gerber's favorite part of the race.

"The course can be divided up in to basically three parts; beginning right off Navy Pier with your section, going through the Manitou Pass, and then the last stretch from the Mackinaw Bridge to the finish line. But my favorite part is sailing up the side of Lake Michigan, passing Point Betsie, the Manitou Islands and Leland, " Gerber explains.

Gerber usually passes by the Sleeping Bear Dunes Area on Sunday afternoon or early evening, and over the years has developed a collection of amazing snap shots. On days with good weather, Gerber says, he can get as close as five miles away from Empire beach, a place where he loves to take his children and wife, a Traverse native.

Gerber's family usually joins him at the end of the race as well, enjoying the celebratory atmosphere on Mackinac Island. "After you pass Gray's Reef, you're staring at the Mackinac Bridge for another 25-28 miles, dealing with the ferry traffic and the weather. So its always a huge relief to dock in Mackinac," Gerber says. "I grab a cocktail, and my family and I go visit the other boaters we've met over the years. Then we just cruise around the island for the rest of the day." Sounds as though just landing in Mackianc is a prize in itself–the simple Northern Michigan pleasure of enjoying the sunshine, water and good friends.

When not racing, Gerber lives in Traverse City with his wife and six children, all of whom are avid sailors as well. When I asked him "Why Traverse City?" I expected an answer related to sailing, and our proximity to the water. Instead, his reply was not that of a sailor, but of a Northern Michigan father. "Traverse City is a great place to raise a family," Gerber said," For example, they are taking sailing lessons on Boardman Lake with the Traverse City Community Sailing Team. They are participating in the community, and I can participate in their lives."

We can expect to see the entire Gerber family enjoying the upcoming National Cherry Festival–sure its only a week before the Race to Mackinac, but when you take things as simply as David Gerber does, you have time to enjoy the little things.

Stay the course with the CYC Race to Mackinac at MyNorth.com!
X
X