An Inside Look at John Cross Fisheries in Charlevoix 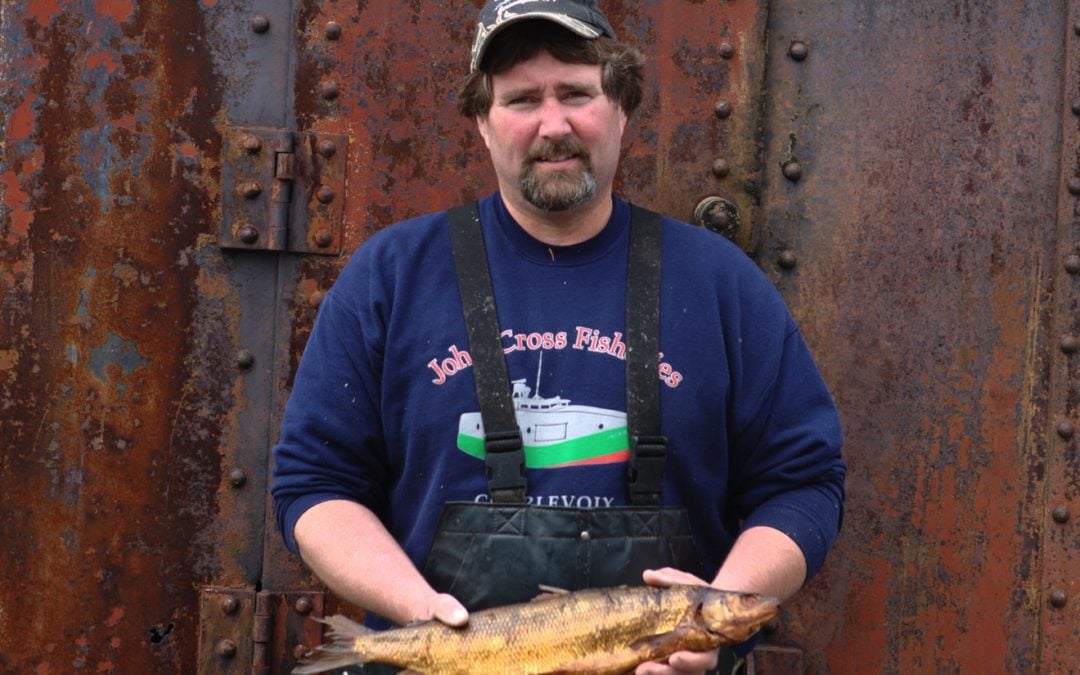 June Cross, the matriarch of iconic John Cross Fisheries, welcomes us behind the scenes and shares three of her favorite fish recipes.

Featured in the July 2012 issue of Traverse Magazine. Get your copy.

Behind the ancient screen door at Charlevoix’s John Cross Fisheries, pearlescent piles of tapered whitefish and walleye fillets fill a glass case. Only a few hours have passed between the animated flop from a net and the deft cut of a filet knife. The adjacent fish processing room echoes with the dueling music of whirring blades and sloshing rinse water. The smell is profound but evocative with the lakey sweetness of freshwater fish mingled with the thick vapors of the smokehouse.

The woman answering phones, giving out orders, recipes and wrapping whole smoked whitefish in a practiced origami of Scotch tape and butcher paper is proprietress June Cross. She wears a sweatshirt with a likeness of the family’s last working trawler and gives an easy smile to everyone who walks through the door. A fresh shipment of ice-packed totes arrives, and June scurries off as more fish enter the fray.

Its weather-beaten patina wrought by decades of Lake Michigan storms, the exterior of John Cross Fisheries remains an invocation of old North: two rusting gray tugs rock in the boat slip, their aft decks snarled with netting and sun-bleached marker buoys, a 60-year-old iron smoker impregnated with fish oil and wood smoke stands beside a pair of splintered oars and an old captain’s wheel. 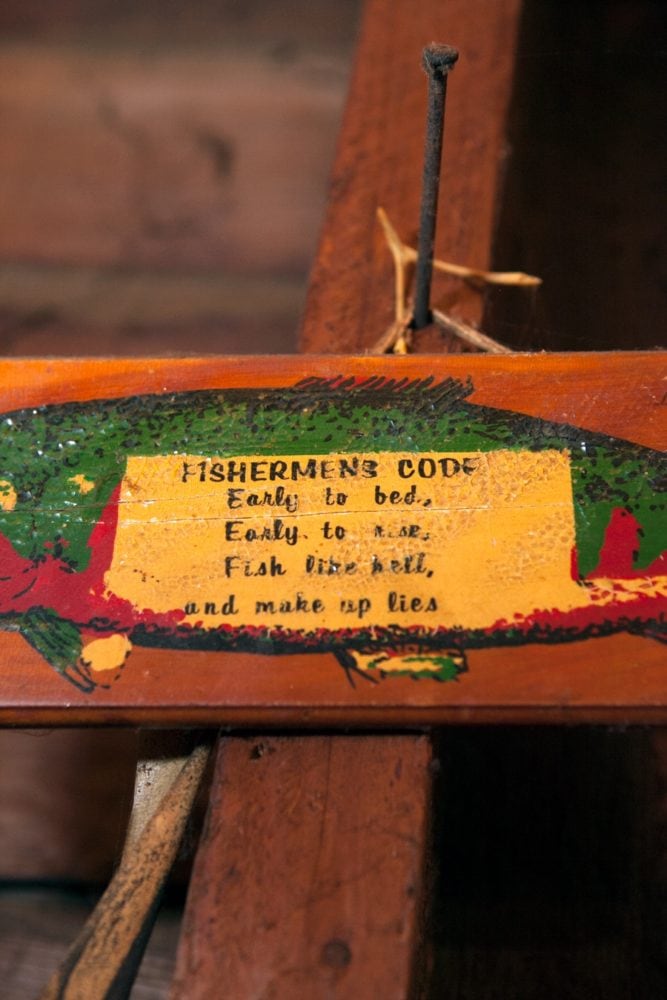 Inside, however, the shop thrums with a mechanized efficiency that processes up to 10,000 pounds of Great Lakes fish in a single day. Truck- and trawler-loads of whitefish, lake trout, perch and walleye are quickly unloaded by the Cross family and their supporting crew and fed through the gleaming teeth of custom machines designed to behead, de-fin, scale, filet and de-bone the piscatorial mother lode before it ships to market. “The boys start at six a.m. and sometimes don’t finish until late at night,” June Cross says.

June Cross has lived her entire life along one shore or another. She spent her childhood among pristine interior lakes in Northern Ontario, where her parents operated the Frontier Lodge, a lumber camp turned fishing resort east of the Soo. There, in the great Northwoods, June learned much of her kitchen wisdom. “I moved south to Charlevoix to work as an X-ray technician and wound up a fisherman’s wife,” June says, smiling. 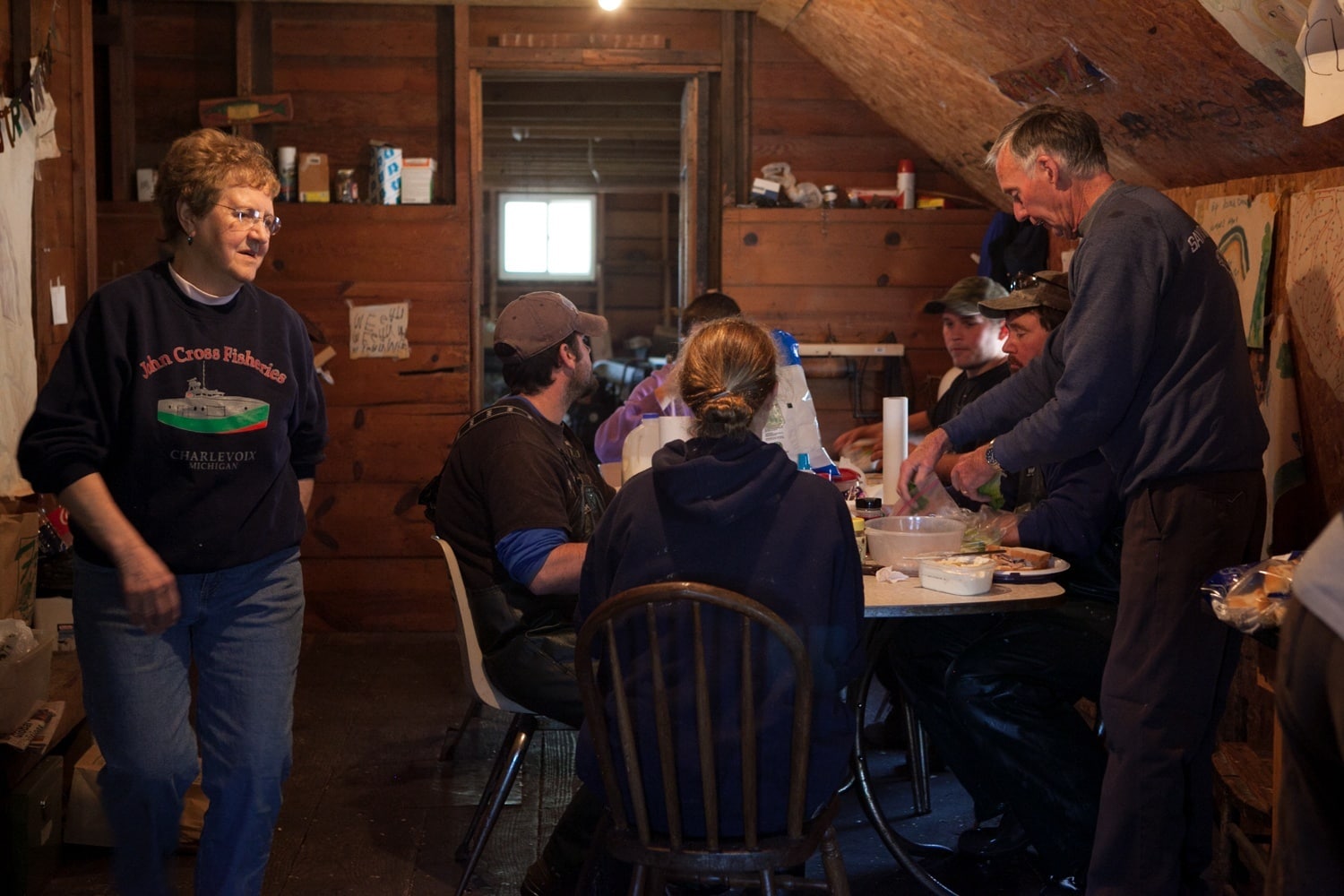 A grassroots gourmand, June serves as the culinary anchor of the Cross fishing enterprise, developing closely guarded recipes for the family’s retail operation, including the universally coveted Three Fish Dip, a smoky commingling of whitefish, lake trout and salmon blended with mayonnaise, fresh herbs and proprietary spices. “It’s not uncommon to see a hundred pints go out the door on a busy summer afternoon,” June says. On this quiet day in May, she sighs thinking about the summer crush ahead.

June’s husband, John Cross Jr., took over the company from his father, a Beaver Island native, who started the fishery on Charlevoix’s Round Lake in 1945 supplying local resorts and restaurants with fresh whitefish, trout and perch netted from the surrounding waters. John Jr.’s mother, Hulda Cross, owned the restaurant The Nautical, where she expertly fried whitefish and lake trout from her husband’s nets.

The Nautical closed over 40 years ago, and changes in Great Lakes commercial fishing regulations have taken the Cross family off the water, but their business of supplying Northern Michigan’s best kitchens with fresh local fish continues at a frenetic pace. John and June’s daughter, Kellie Sutherland, and son, Jack Cross III, manage the daily operations of the fishery along with a host of grandchildren who rotate through the stations, de-boning fish or manning the counter after school and during summers. 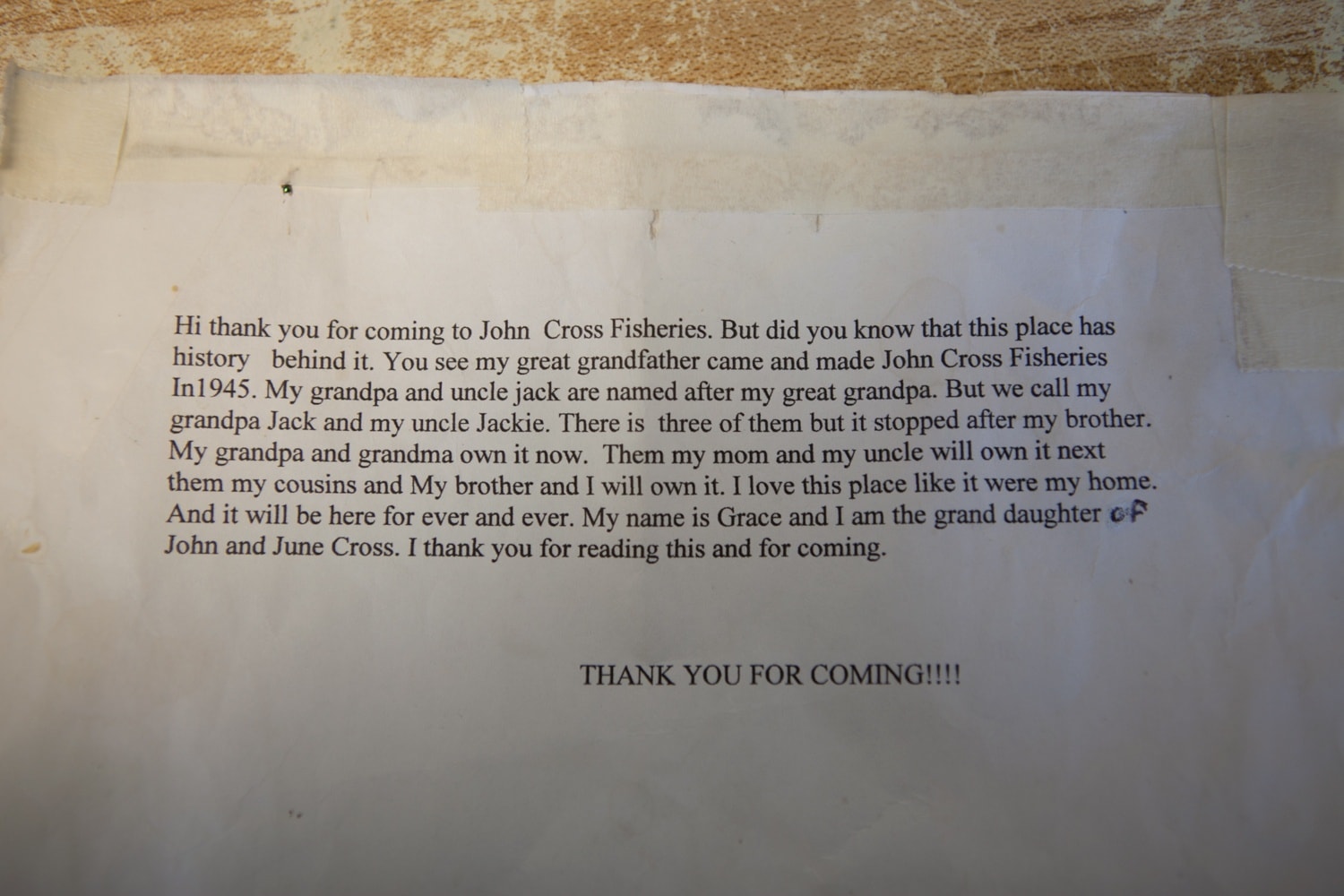 June Cross tries to contain a wry smile as she tells of her found love for whitefish, the core of her fishery’s livelihood. “Where I grew up in Canada, everyone ate lake trout, and we used whitefish for fertilizer,” she laughs. “But I’ve really grown to love them. Because the fish lives deep in the water column, it has fat reserves that keep it moist no matter how you cook it. With a lot of our Lake Michigan perch lost to zebra mussels and the problems with lamprey and lake trout, the whitefish have always been there, like a gift.” While indisputably delicious when smoked over hardwood or pan-fried with a crust of seasoned flour and potato buds, the ubiquitous whitefish has uncommon versatility, and June also recommends simply grilling the fish with olive oil and fresh herbs or poaching it with white wine and lemon.

Perched between multi-million dollar luxury boathouses sheltering teak-accented yachts and surrounded by manicured terrace gardens, John Cross Fisheries is stitched into the fabric of real Northern life, a fresh fish shrine to self-reliance and the bounty of our living waters. As farm-to-table cooking and local food movements dominate the culinary conversation, June Cross and her family remind us that these ideas have been revived, not invented, and that with responsible stewardship and perseverance there will always be whitefish to eat and delicious new ways to eat them. 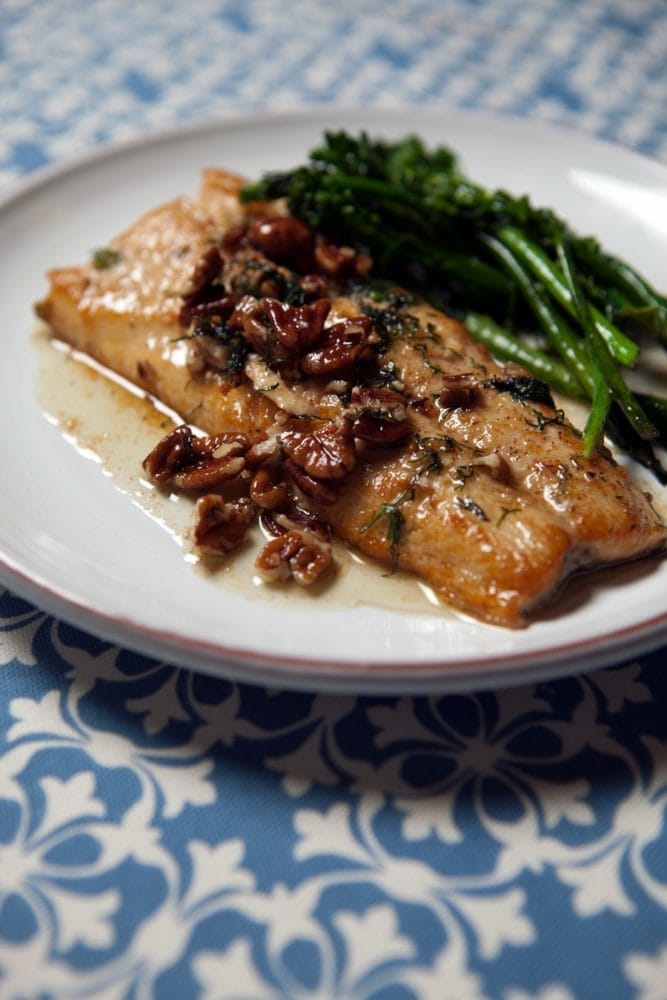 Pre-heat oven to 450 degrees. In a small bowl whisk together maple syrup, soy sauce, ginger and cornstarch solution. Place fillets in a shallow baking dish, skin side down and pour over syrup mixture. Bake fish for 12 to 15 minutes, basting halfway through, until fillets just begin to flake easily. Garnish with chopped pecans, dill and remaining glaze before serving. 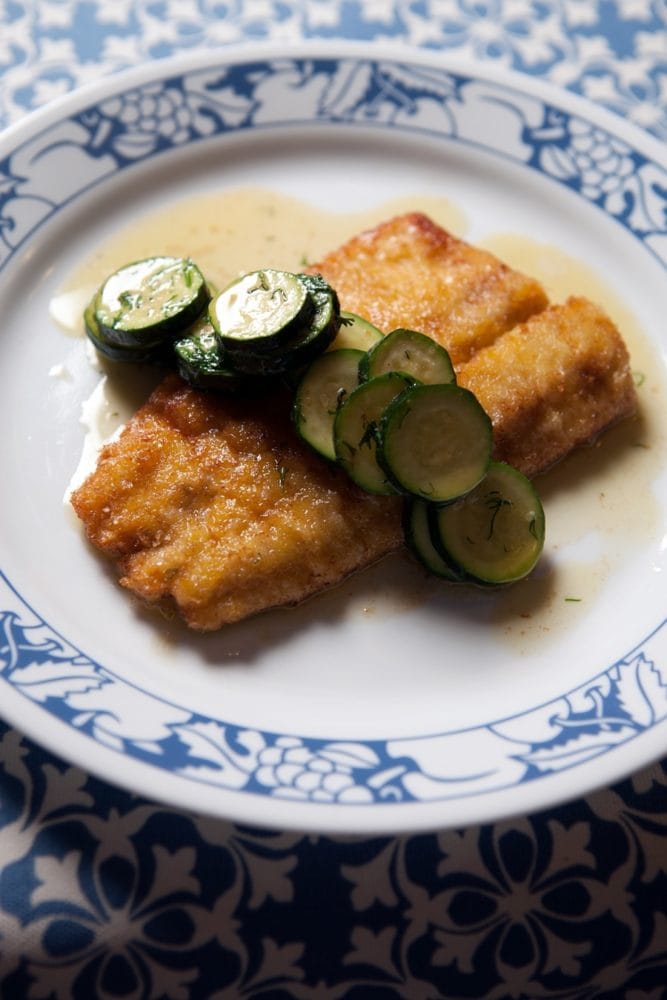 Beat the eggs in a medium-sized mixing bowl and set aside. Combine potatoes, cayenne and half the salt and pepper in a shallow dish; in a separate dish combine flour and remaining salt and pepper. Heat equal parts clarified butter and oil over medium-high heat in an 11-inch sauté pan. Dredge whitefish fillets in flour, shake off excess, dip in egg and then dredge in potato mixture and sauté until golden brown and crisp, three to four minutes per side. 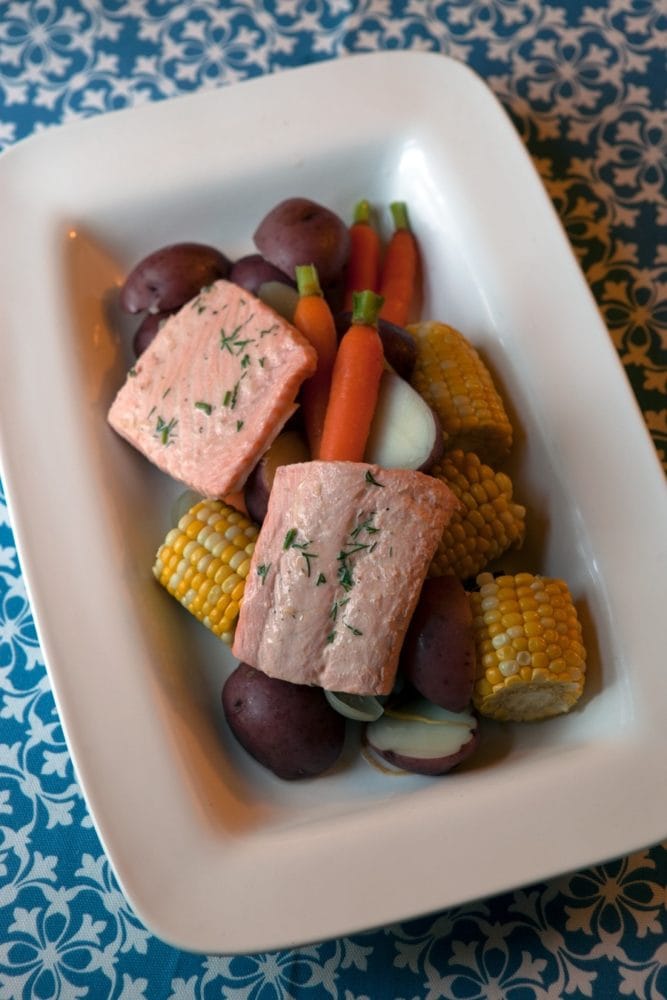 Combine ingredients in a 16-quart stockpot and cover with water; set burner to high heat and once broth is boiling reduce heat and simmer for one hour. Using a sieve strain fish broth into a clean stockpot and discard solids. The fish broth may be made one day in advance and stored in the refrigerator.

In a 16-quart stockpot bring fish broth to boil, add salt and reduce heat to medium. Add potatoes, onions, carrots and garlic and boil for approximately 12 minutes, add fish pieces and boil for approximately eight minutes longer or until fish flakes easily. Using a strainer, remove fish and vegetables, divide onto plates and serve with melted butter and lemon wedges.

Visit these local family fisheries for fresh and smoked Great Lakes fish and advice on how to prepare them.

Click the cover to read the Charlevoix Vacation Guide.