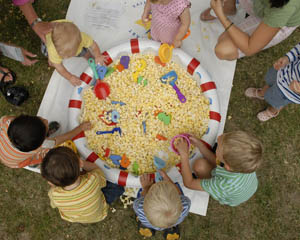 Last year’s inaugural Kids Fest was such a hit that we’re bringing it back again this year! After the $1 family movies at Lars Hockstad Wednesday-Saturday at 9:30 am, join us on the beautiful lawn outside for games, arts and crafts, performances, sports, bubbles, music, tiny tots area, family comfort station, food, give aways, misting tents courtesy of Team Bobs, and much more. The Northern Michigan Chapter of the American Institute of Architects is even creating Thor’s castle for the kids to explore! Kids Fest takes over the lawn outside Lars Hockstad Auditorium Wednesday, August 1 – Saturday, August 4 from 11 am to 2 pm. Bring some sunscreen and kids ready to have fun—the water and entertainment are on us!

Bring your tweens to meet the German equivalent of “The Goonies” in this blockbuster hit from across the ocean. The Crocodiles are a close-knit group of 11-year-old friends who build forts, issue dares to one another, and generally horse around. Then a resourceful newcomer to town wants in on the gang, and his wheelchair becomes an issue. Part “The Outsiders,” part Hardy Boys, part “Stand By Me,” this fast-paced, mystery-driven film breaks down stereotypes and celebratesthe bonds of friendship. Warning: dialogue in this German film is stronger than an American audience may be used to. Slurs and stereotypes are expressed not for shock value, but rather as part of a larger and more important narrative about kids learning how hurtful their exclusionary actions and hateful words can be…and then how we learn to make amends. In German with English subtitles.

Some kids are natural born entertainers, and for the American youngeters who discover a passion for the circus arts, Circus Smirkus is a natural home. Each year, the only traveling youth circus in the US assembles the finest young performers for a summer tour of 70 shows. This great documentary captures it all, from the grueling auditions to the inspiring success of a standing ovation. Meet clowns, trapeze artists and jugglers as they experience the highs and lows of collaborative performance, polish their acts and nervously await the audience’s reaction. “Circus Dreams” perfectly balances the fun of the circus with behind-the-scenes drama in a moving demonstration of what dedication, passion, talent and ambition make possible—no matter what your demographic. This film is appropriate for all ages; the little ones will watch the performances in awe, but thematically the film is better suited for slightly older kids. In English.

Pack up your young superheroes and come see the story of Thor’s beginnings, created by animators from Iceland over the course of seven years. It’s a delightful, beautifully animated and original take on the story of young Thor, who lives in a peaceful village with his human mother, and doesn’t have much to do with his father Odin, King of the Gods. But when an army of giants and Hel, the Queen of the Underworld, attack the village, Thor must foil an evil plot that endangers the world of both men and the Gods. Fortunately for Thor, a talking hammer named Crusher falls from the sky, claiming to be an all-powerful weapon. If your kids like Disney and Dreamworks films, this one is for them, with great characters who spring off the screen, and comedy that plays for the young and old alike. Dubbed in English.

Shorts for Kids with Magic Piano

A perennial favorite of kids fest programming, our collection of short films from all over the world this year features the 25-minute masterwork “Magic Piano,” about a young girl named Anna whose father is forced to leave her in Warsaw with her aunt so he can go to London in search of work. While trying to hide from her annoying cousin Chip-Chip, she discovers a magic piano in a garbage pile that transports them over the ocean through stormy weather to a safe harbor. Shortlisted for an Oscar, “Magic Piano” is one in a series of shorts set to Chopin’s études. This year’s shorts also introduce us to a frenetic beaver, a life-saving fox, Martians having a picnic, a mouse who wants a friend, and everyone’s favorite Android, Floyd. Appropriate for all ages. In English.

Tickets go on sale July 15th for Friends of the Film Festival at 11am. Click here to become a Friend!

For more information about the Traverse City Film Festival, go to their website!