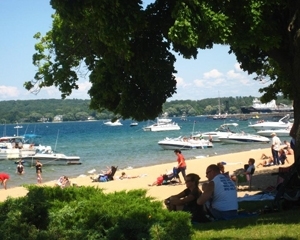 The William G. Milliken Waterscape, an interactive outdoor educational exhibit that will demonstrate the life cycle of water,  will be a featured element of the city’s Clinch Park Phase I Bayfront Plan. It will be built using $150,000 in funds provided to the city last year by DTE Energy Foundation in celebration of the 10-year partnership between DTE Energy and the National Cherry Festival. The waterscape will be depicted on the DTE Energy float in the Cherry Royale Parade, Saturday, July 14. Traverse City Mayor Michael Estes said the waterscape “will add a fun and educational element to Clinch Park.”

Fred Shell, vice president of corporate and government affairs for DTE Energy and president of the DTE Energy Foundation, said the foundation is proud to support the Bayfront initiative and to honor “the place that shaped the values and fed the spirit of one of Michigan’s earliest environmental stewards.”

Gov. Milliken’s environmental views, he said, were heavily influenced by the beauty of the Traverse area. Between 1969 and 1983, Gov. Milliken enacted some of Michigan’s most historic and groundbreaking environmental protections, including a ban on DDT, limits on phosphorous in detergents and the state’s beverage container recycling law.

Initial plans indicate the waterscape will collect water in shallow pools from sub-surface groundwater run-off, watershed surface run-off and small streams and “recycle” it via a raining tube sculpture. It will also feature educational displays explaining the life cycle of water and its importance to the environment.

“Revitalizing the entire Traverse City Bayfront will further define our community and attract residents and businesses to move here,” he said.

Get the latest buzz on Northern Michigan at MyNorth.com!
X
X