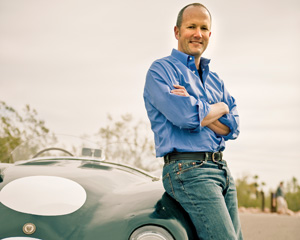 Travese City Events: On the morning of Saturday, June 23, nearly 100 classic cars will take off from downtown Traverse City on the first leg of a nine-day, roughly 2,000-mile road rally race called the Great Race, which will trace a grand arc around the Eastern Great Lakes and back to finish at the Henry Ford Museum in Dearborn. The annual event changes locations each year and this year is sponsored by Traverse City–based Hagerty Insurance, which specializes in classic auto insurance. We check in with Hagerty CEO McKeel Hagerty to get some backstory.

First, help us understand what a road rally race is.

It’s not a high-speed race, it’s about incredible precision in driving. Teams receive a set of instructions at the beginning of the day, just 20 minutes before they start—about 200 separate instructions—and your placing all depends on how close to a perfect theoretical time you arrive at certain points along the way.

We understand teams aren’t allowed to use much technology and that even the odometers are taped over.

They can’t use GPS or any computers. It’s all stopwatches and paper, really complicated charts. So when you, say, hit a stoplight, you have to calculate how that affects your time and adjust. It involves very complicated mathematical formulas. It’s very mentally demanding, especially for the navigator.

What kinds of cars are we going to see?

They have to be earlier than 1969, but most are pre-1950. These are not just a bunch of claptrap old cars. These are very remarkable powerful cars for their day being used for what they were designed to be used for, driving. These are competitive quality cars, truly great cars out on the road.

There’s obvious connections between the Great Lakes and auto history, but this is the first time the race has been here. Why is that?

Right, it took several years of discussion to get them here, and that’s interesting, given the fact that the Motor City produced most of the vintage cars in the United States, and that connection between Detroit and Northern Michigan used to be really strong. In some ways, driving from your city house to your cottage is what these cars were built for. But the country and even the industry has kind of forgotten about us. But I think we’ll see the race back in Northern Michigan, but maybe not Traverse City. I’ve talked with them about a Lake Superior race at some time in the future.

What is your advice for people who want to see the cars?

Be sure to come down Saturday morning for the start. This is a kid friendly event. Bring cameras, talk to the drivers. These are really important cars, and the drivers love to talk about them. There’s also a trophy run to Empire on M-72 on the day before the race.

Is there a particular car we should all be sure to see?

The 1917 Peerless Speedster, often referred to as the Green Dragon. It’s gigantic, open cockpit, big pipes, a loud V8, lots of power and has participated in the race for more than 15 years. Just to hear the sound of these high-horsepower early cars is really exciting.

This article was first featured in the June 2012 issue of Traverse, Northern   Michigan's Magazine. Click here to order your copy today!