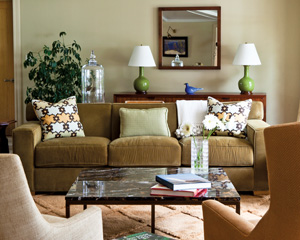 Northern Michigan Renovation: The town of Charlevoix collectively gasped one fall day when a demolition crew showed up at an iconic Park Avenue house designed by Earl Young, the man behind the town’s charming “Hobbit Houses.” People stopped to protest and find out what the new owner could possibly be thinking, ruining such a special example of Young’s work in the leafy lakeshore neighborhood. Onlookers were relieved to learn that the house was not being destroyed—quite the contrary, actually.

The workers were on site to begin a renovation by removing an added-on garage and correcting drainage problems—all while carefully preserving the house’s organic forms and unusual character. The builders had taken on a serious challenge for a homeowner who wanted the extensive project completed by the Fourth of July, barely nine months away. And all eyes were watching because Earl Young’s largest home is beloved by the people of Charlevoix.

One of several houses that attract architecture gawkers on the west side of town, 14581 Park was designed and built in 1948 for the Sucher family. Young designed the undulating roofline as a natural extension of the rolling, parklike land here, perched just a touch above the sandy Lake Michigan beach. Young’s vision of a low-lying structure was beautiful but somewhat impractical. Its foundation lay below grade, and its unusually low ceilings seemed just fine to the short architect famous for designing spaces to suit himself. Correcting the problems inherent in the design was important to assure the longevity of the structure. For the new owners, who summer in the Dutch Colonial next door and use the Young property as a guesthouse, maintaining historical integrity was a high priority as well.

Architectural firm Dufner Heighes of New York City developed a plan and worked closely with Jeff Collins of Glennwood Custom Homes in Petoskey. Smart updates included removing the tacked-on garage, raising ceilings and lowering floors to create a more comfortable interior. “This project expanded my horizons,” says Collins. “The client told us what he was after, and it wasn’t easy. Now I know what we’re capable of.”

The landscape got a makeover, too. The design by Scott Philp of Landscape Logic in Charlevoix accentuates the rolling lines of the house using added topsoil combined with a drip irrigation system to preserve mature trees. The effect is simple and open, designed to blend seamlessly with the owners’ adjacent yard. Philp naturalized the beach by planting native grasses and added a flagstone patio that blends beautifully with the existing stone walls. New walls built to replicate Young’s casual design create a graceful entry at the front of the house. Differences between the new and original stone walls are imperceptible.

Inside, architects adjusted the layout to better suit its modern use. Aging windows and doors were replaced with custom look-alikes. The engineering feat that gave the rooms another 12 inches of height created a need for new stone floors and a wood-clad ceiling.

The centerpiece of the house, a room-spanning, sunburst-style stone hearth, still holds its ground in the living room where it mirrors the Lake Michigan sunset every evening. Furniture and interior finishes chosen or designed by Dufner Heighes reflect the era, staging a sleek counterpoint against Young’s elemental creation.

From the street, the neighborhood icon is still plainly visible and, to most eyes, appears unchanged. In a cordial gesture of openness, the owners held an open house for the community shortly after the project’s completion. Townspeople walked past the impeccable stone walls, through the custom door, and upon seeing the respectful improvements they all breathed a sigh of relief.

This article was first featured in the April/May 2012 issue of Northern Home & Cottage.