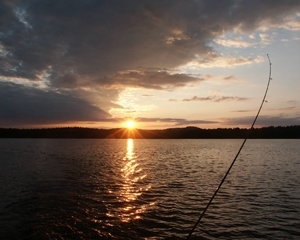 Harbor Springs: Salmon were found past Five Mile Point in 80 to 100 feet of water. Try spoons and flies. Smallmouth bass can be found near any structure.

Bear River: For steelhead, some ripe females are still being caught by those drifting spawn bags or jigging with crawlers. Skamania are now showing up at the dam. A few brown trout have also been caught.

Petoskey: Shore and pier anglers are catching smallmouth bass on natural baits. A couple walleye were caught off the end. Rock bass, carp and a couple steelhead were caught on crawlers off the old dock near the mouth of the river.

Charlevoix: Anglers are targeting salmon from Bay Harbor to Bell's Bay however most of the fish were caught 60 to 120 feet down in 160 to 180 feet of water around North Fox Island. Salmon were also marked near North Point and the "Can" off South Point. Meat rigs and flasher fly combos were the ticket. Lake trout were hitting on spoons in 100 to 120 feet of water between Bell's Bay and North Point. Pier anglers caught walleye on stick baits and white grubs after dark. Smallmouth bass were caught on crawlers just off the bottom but many were small.

Traverse City: Both bays have good bass fishing. Smallmouth were caught in shallow waters or 8 to 15 feet deep. The West Bay had lake trout for those jigging in 100 feet of water. Several chinook salmon have also been caught.

Elk River: The number and size of smallmouth bass is declining however bigger fish may still be entering the river. Night crawlers work best. Anglers are catching lots of rock bass.

Boardman River: Anglers have been targeting carp and smallmouth bass. Try live bait for the smallmouth or jumbo corn and dough for carp.

Platte Bay: Fishing was slow with only one chinook caught on a green spoon 60 feet down in 100 feet of water. Smallmouth bass were caught by those casting in the surf near the mouth of the river.

Frankfort: Had good fishing for those trolling 40 to 70 feet down in 120 to 210 feet of water with meat rigs, flashers and spoons. Try glow in the morning and blue during the day. Those bouncing flashers and spin glows along the bottom have caught lake trout. With the warm weather, there is a definite temperature break.

Arcadia: Fishing was good in the late morning and at dusk. Boats are heading straight out and south towards the Golf Course and fishing 60 feet down in waters 80 to 180 feet deep. Green and blue were the hot colors.

Onekama: Fish are being caught in the early morning 45 to 80 down in 120 to 180 feet of water along the drop straight out from the channel. Large schools of bait fish were marked with chinook salmon just above them.

Portage Lake: Bluegill fishing slowed but some keepers were still caught off the east shoreline and Little Eden. Bass anglers are having a great year with several large and smallmouth caught. The drop-offs are producing the bigger fish but catch rates were good around the docks. A couple 12 and 14 inch perch were caught but most were on the small side.

Lake Cadillac: Warm temperatures have pushed the bluegills into deeper water along the drop-offs and the weed beds. Not much on walleye but bass fishing was very good. Anglers are using crawlers, leeches, plastics and spinners.

Manistee: Boats are doing well in 80 to 180 feet of water. Try fishing the upper half of the water column with orange or green spoons and try meat rigs deeper. Pier fishing is slow for steelhead and brown trout.

Ludington: Salmon and steelhead have been caught 40 to 100 feet down in waters 70 to 140 feet deep when using green and blue spoons.

Pentwater: Was producing a good number of steelhead and salmon in 65 to 90 feet of water. Steelhead were caught about 50 feet down while salmon were 40 to 60 feet down. Yellow and green were the hot colors. Good bass fishing in the channel with limit catches reported by those still-fishing with minnows.

MyNorth.com has endless ways to get you outdoors in Northern Michigan!
X
X