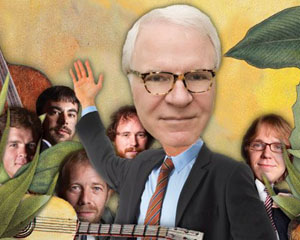 Northern Michigan Events: If you haven't looked at the Interlochen line up this summer, then no worries! Here is a compilation of what to look forward to this weekend.

Tickets are $26 and can be purchased online (https://tickets.interlochen.org/)

Steve Martin and The Steep Canyon Rangers: An Evening of Bluegrass and Comedy

Steve Martin has managed to weave the two worlds of music and comedy into a perfect medley. His comedic wit and his banjo picking skills are all a part of his collaboration with the Grammy-nominated North Carolina band, the Steep Canyon Rangers. His Interlochen stop is an early part of his tour, but so far the reviews have been nothing but glowing. Joel Francis from the Kansas City Star said that it was difficult to tell if his performance, "was a comedy show hijacked by bluegrass music or the other way around. Either way, it was a success."

The performance is this Friday so call the box office today at 800.681.5920 to see if tickets are still available!

Going to this event? Stop by the MyNorth.com booth to enter our summer vacation contets. One entry, five chances to win!

This performance between these two male musicians is sure to be an enjoyable time for all ages. Gavin DeGraw and Andy Grammer are both musicians who have made a very successful name for themselves in the pop world. Gavin DeGraw has had hits such as "Follow Through" "Chariot" and "I Don't Want To Be." Andy Grammer is best known for his single " Keep Your Head Up" which encompasses his "vibrant pop/rock/soul mix." An evening with two performances is too good to pass up, purchase your tickets today to ensure your Saturday night plans!

To end your Sunday evening on a relaxing note make sure to attend one of the many World Youth Symphony Orchestra concerts that Interlochen is putting on this summer. This Sunday the theme is "American Memories" which uses music to stir nostalgia and remind the audience about moments in history such as the anniversary of 9/11, the Summer Olympics, the Titanic and the 85th anniversary of Interlochen Arts Camp.

For a complete list of the Interlochen performances check out MyNorth.com!