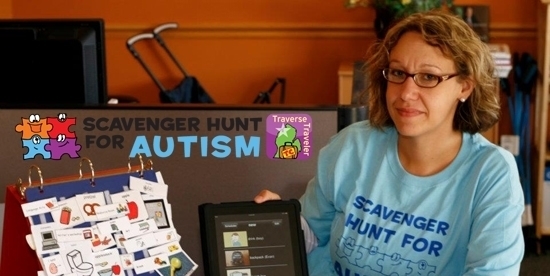 Traverse City Events: On Saturday, April 14th, the streets of downtown Traverse City overflowed with community support as eighty-four teams took part in the first-annual Traverse Traveler Scavenger Hunt for Autism. Intended to raise support and awareness for local children with autism, the teams set out from the City Opera House on a scavenger hunt of discovery.

Teams navigated their way through downtown Traverse City businesses with smartphones, using the Traverse Traveler app to locate each business, and a QR code reader to check-in and unlock clues. The teams encountered puzzles and games that challenged their brains, their sense of direction, and teamwork. Volunteers stationed at every venue assisted with the on-site challenge, and handed out prize tickets. Not losing sight of the benefit, posters at each location shared quotes, facts and insight into the world of Autism.

Brandy Wheeler, creator of the Traverse Traveler app, organized the Scavenger Hunt for Autism. "My goal was 50 teams. With that number I believed we could reach our target of 1000 check-ins and earn an additional $1000 from our title sponsor, Lucky Jack’s. We were blown away by the overwhelming response from the community. We ended up with 337 people and a grand total of 3078 check-ins! It was amazing," she added.

The event drew participation from a diverse crowd including families, educators, children with autism and disabled adults as well as community members from as far as Petoskey. Teams explored the streets of downtown Traverse City, often discovering businesses they’d never been in. Cindy Hardy, owner of Lilies of the Alley commented, “I was very pleased with everything and look forward to doing it again next year! A lot of new people saw our shop for the first time and will be back.”

The Traverse Traveler Scavenger Hunt for Autism is a fundraiser for the iPads for Autism program at Traverse City Area Public Schools (TCAPS), a pilot program started in 2011 which provided iPads for 9 students at TCAPS with Autism Spectrum Disorder. To grow this program and meet the needs of their 120 students with autism, Wheeler met with Special Education Director, Jame McCall to become a Partner in Education. "Brandy Wheeler of the Traverse Traveler along with the group of volunteers, made a significant difference in the lives of many students with autism. Through their partnership with TCAPS, 20 or more students will have use of an iPad to enhance their educational experience. We are grateful for the passion, organization and commitment the Traverse Traveler brings to this partnership," said McCall.

The fundraiser generated donations from event sponsors, team registrations and private donors. TCAPS Board of Education recognized Brandy Wheeler and the Scavenger Hunt committee for their donation of $12,131 to the iPads for Autism program — an amount that continues to grow. Just after the event the Traverse City Rotary Committee for the Handicapped awarded a $2000 grant to the iPads for Autism Program from funds raised during their annual Tag Day, increasing the total event proceeds to more than $14,000.

The positive response from event participants and venues, combined with the commitment from title sponsor Lucky Jack's, has event organizers already planning for next year. TCAPS will continue to accept donations online for the iPads for Autism program at www.TCAPS.net/Autism. For more information on the Traverse Traveler Scavenger Hunt for Autism visit TraverseTraveler.com/Autism or find them on Facebook.

Find more ways to get involved Up North at MyNorth.com.
X
X