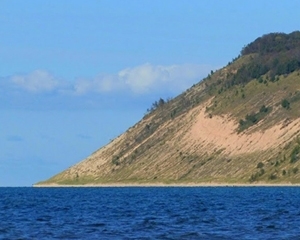 Sleeping Bear Dunes National Lakeshore:To show our appreciation for those who serve in the U.S. Military, on Saturday, May 19 –Armed Forces Day – the National Park Service will begin issuing an annual pass offering free entrance to Sleeping Bear Dunes and the other 396 national parks for active duty military members and their dependents.

“We all owe a debt to those who sacrifice so much to protect our country,” said Sleeping Bear Dunes National Lakeshore Superintendent Dusty Shultz. “We are proud to recognize these brave men and women and hope that a visit to Sleeping Bear Dunes or any national park will offer an opportunity to unwind, relax, rejuvenate, and just have fun with their families.”

This military version of the America the Beautiful National Parks and Federal Recreational Lands Pass also permits free entrance to sites managed by the U.S. Fish & Wildlife Service, the Bureau of Land Management, the Bureau of Reclamation, and the U.S. Forest Service. The pass is also available at these locations.The National Park Service cares for special places saved by the American people so that all may experience our heritage.

“Through the years, military members, especially those far from home in times of conflict, have found inspiration in America’s patriotic icons and majestic landscapes, places like the Statue of Liberty and the Grand Canyon that are cared for by the National Park Service and symbolize the nation that their sacrifices protect,” said National Park Service Director Jonathan B. Jarvis. “This new pass is a way to thank military members and their families for their service and their sacrifices.”

National parks and the military have strong ties going back to the establishment of Yellowstone as the world’s first national park in 1872. The U.S. Cavalry watched over America’s national parks and did double duty,serving as the first park rangers until the National Park Service was created 44 years later. During World War II, many parks were set aside for the training and care of military personnel. Today, dozens of national parks commemorate military battles and achievements.