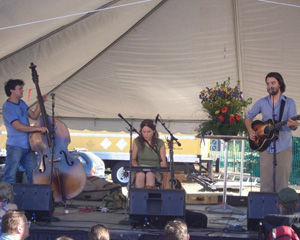 Northern Michigan Events: The annual Dunegrass Music Festival has gotten a serious make-over this year! Now known as the "Sleepy Bear Music Festival" the event has been moved to Lake Ann, MI, a short drive from both Traverse City and Sleeping Bear National Lakeshore. Located on over 100 acres of beautiful camping ground, the festival runs from July 27-29, 2012. Additionally, "Early Bird Passes" are now available for purchase, giving the buyer three years of membership to Sleepy Bear, as well as early access to the camp ground and the members only concert on Thursday, July 26. While the festival may seem different, one thing that hasn't changed is the amazing collection of talent brought in for this year's line up.

Martin Sexton In this age of accelerated lifestyles, it is rare to find someone who takes time to stop and think about the big questions. Martin Sexton does just that, taking on questions of peace and social justice in his folk and classic rock inspired music.

Stooges Brass Band Straight out of New Orleans, this premier brass band has been serving up traditional jazz with a hip hop twist since 1996. Their modern take on a classic American sound sets them apart from the crowd, enabling them to perform with other music  legends like Ray Charles and Mos Def.

Dirtfoot Like the spicy gumbo from their home state of Louisiana, Dirtfoot is a crazy mix of flavors which come together in an amazingly unique sound. Led by songwriter Matt Hazelton, the band uses all kinds of instruments from the banjo and guitar to pots, pans, and bean cans. Come hoot, holler, and stomp along with their rollicking jazz rhythms and growling vocals for an evening of down home fun.

Frontier Ruckus If you were to distill the feeling of Up North into music, it might sound something like Frontier Ruckus. Frontman Matthew Milia's inspired lyrics feature descriptions of frozen lakes and deep forests. Frontier Ruckus's smooth blue rhythms and complex banjo picking make for a hauntingly beautiful style all their own.

Samuel Seth Bernard & May Erlewine This Northern Michigan based duo performs contemporary folk, made modern with influences from blues and rock n' roll.

Rootstand Rootsand's motto is "Rebels, Rootgrass and Regge" and they fulfill all of these promises in their folk and blues inspired root-grass music that has an uncanny ability to get you out of your seat and on your feet!

Delilah Dewylde & the Lost Boys Led by bandleader Delilah Dewylde, this Michigan group mixes vintage blues and honky tonk hits with their own songs, combining it into a sassy rock-a-billy sound.

The Go Rounds Coming from all over Michigan, the members of The Go Rounds were brought together by a love of song writing, a respect for the music of the past, and a need to create emotionally expressive music.

Airborne or Aquatic Another Michigan bred group, Airborne or Aquatic takes a lot of it's inspiration from Northern Michigan. Members include already well known artists Seth Bernard, Daisy May Erlewine, and Dustin Edwards, among others.

Jaik Willis An independent performer out of Chicago, Jaik Willis has shared the stage with music legends like Willy Nelson, Snoop Dog, and Justin Timberlake. Willis brings a wild energy with his acoustic guitar, 4 octave voice, and even beat boxing.

Big Dudee Roo Big Dudee Roo will definitely give you something to think about; out of Wayland, Michigan, the group addresses spiritual, environmental, and social issues in their folk/grunge music.

Drew Nelson A Michigan-born Navy veteran, Drew Nelson uses his experiences as a world traveller and an expert fly fisherman to tell stories in his traditional folk music rooted in American rock.

Abigail Stauffer Abigail Stauffer's background as a linguistics major at the University of Michigan shows in her emotionally complex lyrics, which have been said to "warm the heart and serenade the soul."

Gifts or Creatures Husband and wife duo Brandon and Bethany Foote have created the musical experience of Gifts and Creatures, specializing in cinematic soundscapes inspired by Midwestern folklore and Old World history.

Soulpatch A Traverse City export, Soulpatch had roots in various musical styles including jazz, rock, country and the blues. Traditionally they never make a set list- instead responding to the mood of the audience for a unique concert experience!

Red Tail Ring Red Tail Ring, a Michigan-based duo, says that their goal is to push the boundaries of traditional music by combining it with modern influences to touch the heart and soul of the audience.

Potato Moon Potato Moon truly is a family affair! Comprised of the Grand Rapids Stancil Family, the group cannot be pinned down to one variety of music, performing folk and the blues, country, Dixieland and Swing.

The Turnips Since 2009, The Turnips have been a collective in the truest sense of the word. Group members frequently play with other groups, bringing experiences that cultivate a whole new sound based in the blues, rock, and Americana.

Magdalen Fossum Part of a musical Ann Arbor family, Magdalen Fossum, has been taking part in "jam sessions" since she was born. Now eleven, Fossum performs on the ukulele, singing inspired renditions of traditional folk and jazz tunes.

Billy Brandt Involved in the music industry for years, Billy Brandt is finally creating his own Neil Young inspired music, which haunts audiences with it's delicate guitar picking and achingly beautiful melodies.

For more information on the Sleepy Bear Music Festival, incluing maps to the site from Traverse City and the surrounding aread, please visit sleepybearmusic.com

Interested in other events going on Up North? Explore MyNorth.com!
X
X