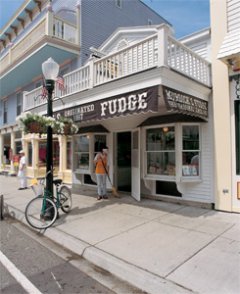 Mackinac Island: A sweet staple on Mackinac Island as long as Northern Michigan locals and visitors can remember, Murdick's Fudge begins the 2012 summer season in a celebratory mood, in honor of their 125th anniversary.

Surviving the sugar rations of WWI and WWII, the Great Depression, and current economical hardships, Murdick's Fudge of Mackinac Island has remained rooted in Northern Michigan history, making fudge with the same natural, quality ingredients as when they first opened, 125 years ago.

In addition to the fifteen-plus flavors of fudge and candies already hand-crafted by their expert fudge makers, Murdick's Fudge of Mackinac Island will create a Triple Chocolate Espresso Fudge (available for a limited time), Almond Brittle and a variety of other new delights in celebration of their momentous 125th anniversary.