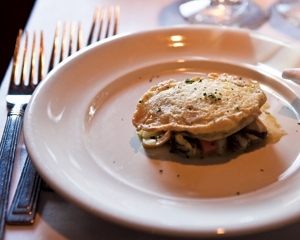 For the fourth year in a row, chef Guillaume Hazaël-Massieux of La Bécasse is throwing down the oven mitt in a divine competition with Trattoria Stella’s chef Myles Anton. The quest? Simply to unite family, friends, patrons and two legendary gastronomies on a spring evening in Northern Michigan.

This year, as in years past, the initial planning session for one of the region’s grandest culinary events, Trattoria Stella’s annual France vs. Italy dinner, began with a brunch.

The 2012 meeting occurred on a sunny Sunday February morning, two months before the April 19 dinner, and commenced as Stella’s proprietor Paul Danielson pulled a tray of puffy, butterscotch-colored popover pancakes from the oven at his Traverse City home. Simultaneously his wife, Amanda, who is Stella’s co-proprietor and sommelier, greeted the guests. The France team entered first in the signature red clog-clad form of Guillaume Hazaël-Massieux. He’s the Lyon-trained chef and proprietor of La Bécasse, an upscale bistro tucked into the miniscule village of Burdickville, near the southeast shore of Glen Lake. Holding his 3-year-old daughter Lizzy in one arm and her sister, 9-year-old Margot, by a hand (Brooke, his wife and co-proprietor, being unfortunately down with the flu), Guillaume also managed to tote a basket that held, among other delectable morsels, a bottle of really nice Bordeaux.

Not to be outdone, at least in the daughters department, the Italy crew bustled in next—translated as Stella’s chef and James Beard nominee Myles Anton, accompanied by his wife, Emily, and their daughters, 3-year-old Annika and infant daughter Maggie. Also present at this anything-but-formal brainstorming session were the girls who live here: 7-year-old Sofia Danielson and her 5-month-old sister, Evi-Mar. The baby was bobbing blissfully in a Johnny Jump Up hung in an open doorway between the popover pancakes and a table laden with English cheeses, fresh-baked scones, local jams and the makings for bloody marys. Imagine into this light-filled room with its bay blue painted walls and abundance of small girls, the Danielsons’ dogs, Stella and Jack, sniffing and wagging their way around people and table legs.

Safe to say that the France vs. Italy event is no steely competition or even a well-oiled marketing scheme, despite that it harnesses the entire Stella wait staff to serve some 130 people an exquisitely elaborate array of at least six French dishes paired with at least six wines and at least six Italian dishes paired with the same number of Italian wines. No, non. It is instead a rich bouillabaisse of an idea that grew organically from three families who are passionate about food and very fond of one another. “Guillaume and Myles are both so skilled but their cooking is so different,” said Amanda as she leaned over to pull Evi-Mar from the Jump Up. “We adore Guillaume and Brooke … when we eat out our first choice is La Bécasse.”

Each year, one month almost to the day before France vs. Italy, Amanda, Myles and Guillaume meet around the extravagantly long table adjacent to the bar, in the shadowy light of Trattoria Stella, to choose the wines they will serve at the dinner. They are always joined by their friend and business associate Jean-Jacques Fertal, who is both a wine importer and the owner of his own distinguished vineyard, Château Des Karantes, set in the French province of Languedoc. Jean-Jacques, an amiable and brilliantly passionate oenophile, is pivotal to the France vs. Italy event because he makes a preliminary selection of wines that fit the quality and price profile of the dinner. The wines that Amanda, Myles and Guillaume winnow from Jean-Jacques’s presentation will determine the proteins that the chefs use to develop their menus. “I could say all right I am going to make this or this or this, give me some wines to go with it,” Guillaume explained just before the 2012 tasting. “But it is easier to taste a wine and say this will go well with a bird a duck or a quail.”

The group tastes 20 to 30 wines before they are finished—Italian and French, side by side. “We don’t want either the French or the Italian to blow each other away—we want them to have similar tastes,” Guillaume said. Then added with a sly grin and an extra lilt to his French accent: “Though the French wines will always be better …”

After the tasting, the chefs meet once more to discuss the dishes they are devising for the menu—a document that they then write in transporting and lively prose. Of the seared dorade royal with ratatouille and emulsion Andalouse Guillaume created for the 2011 dinner, he wrote: “Imagine the smell of the ocean and the smell of lavender carried by the warm Sirocco. The emulsion Andalouse conjures the spiciness of the air. Picture yourself enjoying a glass of Château Karantes, on the terraces of La Clape overlooking the Mediterranean Sea.”

The idea for the first France vs. Italy germinated while the Danielsons were dining at La Bécasse some years back. Jean-Jacques was there that evening, too, and as Guillaume recalls, Amanda came up with the idea of a team dinner. The concept has never been about money—in fact, neither restaurant clears much on it. Rather, it has been to create a buzz about the two cuisines, to give two skilled and creative chefs the opportunity to push and learn from each other, and to put money in the pockets of their staffs during the Northern Michigan shoulder season.

And so, on the appointed midweek April evening, when most Northern Michigan restaurants are scrambling to fill seats, there is always a line of patrons waiting to get into Trattoria Stella. Last year, as in years past, behind its doors and under its labyrinth of creamy-brick arches—courtesy of this Victorian Italianate-style building that was historically a part of the Traverse City state hospital—the restaurant was a hum of activity. While Myles and his kitchen crew chopped, stirred, sorted, baked and sent heavenly vapors wafting, Amanda oversaw a disciplined (if vaguely orgiastic) double decanting of 12 cases of wine. In the front of the house, the wait staff set tables with the efficient air of a small European country mobilizing its military.

During the early years, the Stella crew worried that Guillaume would not arrive on time, but by now they’ve stopped fretting. He arrived last year just in the nick, a blur of red clogs and lively French expletives captaining a minivan full of well-sealed containers and a crew of five to help him prepare it. That last hour before the wait staff begins to serve the courses—always twin plates, one created by Myles, the other by Guillaume—is, according to Myles, when the fun begins each year. “Everyone has a good time. There is no pressure. We laugh and joke.” This April event that brings families, friends, patrons and two great chefs together over an epic meal, Myles added, “is a breath of fresh air.”

This article was originally featured in the April 2012 issue of Traverse, Northern Michigan's Magazine. Click here to purchase your copy!