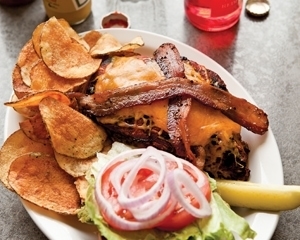 Northern Michigan Restaurants: Pulled pork, burgers, slaw, beignets and quiches… from classic to classy, check out all of the delicious diner eats you can enjoy Up North.

The inviting vapor of smoked pork and the likeness of a smug pig in sunglasses beckon the hungry to Ham Bonz on Eighth Street in Traverse City. Forget saffron hollandaise, single origin coffee and the trappings of diner couture; Ham Bonz democratically delivers heaping plates of old-school comfort chow like four egg omelets loaded with pit brisket, house-smoked pulled pork piled high on crusty buttered Kaiser rolls and steaming bowls of split pea soup. Owner Bo Uzzle greets his patrons with big smiles while shuttling between the grill and a massive pit smoker that huffs the sweet smell of slow-burning maple into the cold March morning as pork butts, hams and whole turkey breasts are infused with its flavor. Morning masochists should not miss the signature Hog Wild, a bed of breakfast potatoes with diced bacon, sausage and ham smothered in cheese and sausage gravy and topped with fried eggs. Bring your appetite, your hangover and your love of vintage Formica as we explore the North’s delicious diner underground. 1108 East Eighth Street, Traverse City, 231.929.9288

Give yourself over to a Higher Grounds cappuccino and an order of crispy beignets while watching the sun crest above the cliffs of Elberta at this fab new Frankfort eatery. Foodies should check out the Pure Michigan omelet made with asparagus, mushrooms, smoked salmon and dill. 727 Main Street, Frankfort, 231.352.8050

En route to an early spring hike in the Jordan Valley, swing through Bojack’s, a polished pine pastry paradise in the sleepy village of Mancelona. Killer pecan rolls and crusty loaves are baked every morning to grace breakfast platters and high-piled sandwiches. 102 West State Street, Mancelona, 231.587.8757

All North, the Brutus Camp Deli’s camo-clad hash slingers serve up some of the greatest breakfast in the Great Lakes basin with smoked breakfast meats from Plath’s, enormous pillowy pancakes with local syrup and redskin home fries. For lunch tuck into such sandwich artistry as the US 31 Roadkill. 4086 US-31 North, Pellston, 231.529.2222

Journeying north from his native Mississippi Delta as a financial services broker, Bo Uzzle did a brief stint as a contractor in Iraq and finally settled on the barbecue business with his purchase of Ham Bonz in 2005. We sit down with Bo for a plate of pork and a brief parley about pit ham and DIY barbecue.

This ham is absurd, what’s the origin?

We use whole Dearborn hams, which I’ve found to be the best at any price. We cut all the meat off the bones and then used those for our soups while about half of the ham goes into the smoker for our Pit Ham sandwiches and omelets. I use a brief, intense process I call flavor smoking so the ham gets smoky but retains its natural moisture.

For those of us aspiring to home barbecue, what are the essential techniques?

Good wood and indirect heat. Both at the restaurant and at home I use chunks of sugar maple and red oak that tend to burn long and slow and give great flavor. It’s important to burn the wood down to coals and then slowly add fresh pieces.

To brine or not to brine?

A good cut of pork butt or beef brisket doesn’t need anything more than a spice rub and a few hours in the smoker.